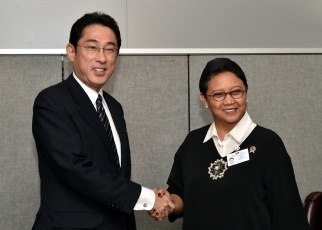 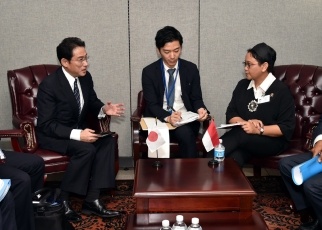 1. (1) In his opening remarks, Minister Kishida stated that he is glad to meet with Foreign Minister Retno again following the historic Foreign and Defense Ministerial Meeting (2+2) held in December last year and explained that he intends to further strengthen Japan's strategic partnership with Indonesia, a major Southeast Asian nation. Minister Kishida also stated that he hopes to steadily implement cooperative projects between the two countries and develop Japan-Indonesia relations overall.

(2) Minister Kishida also stated that he intends to collaborate closely to promote the development of Patimban Port. He also asked Foreign Minister Retno to inform H.E. Mr. Joko Widodo, President of Indonesia, that Japan certainly hopes to secure the participation of Japanese companies in managing the port, which President Joko referred to previously.

(3) Additionally, Minister Kishida explained that he intends to consider making a concrete capacity building support in the maritime security field, as well as strengthening cooperation on countering terrorism, including countering violent extremism.

2. (1) In response, Foreign Minister Retno expressed her view that the relationship between the two countries has taken an important step since last year's 2+2. She explained that economic relations are always a priority issue in Japan-Indonesia relations, and a large number of business representatives from Japan are visiting Indonesia and are being made welcome by President Joko. Foreign Minister Retno also stated that Indonesia hopes to cooperate with Japan on the Patimban Port development, as President Joko conveyed in his clear message to Mr. Shinzo Abe, Prime Minister, in the  conversation at the Outreach Meeting of the G7 Ise-Shima Summit.

(2) Additionally, Foreign Minister Retno expressed her appreciation in relation to cooperation in the maritime security field, along with explaining that this type of cooperation is important to Indonesia, which consists of 17,000 or more islands. She also stated that Indonesia hopes to strengthen cooperation on countering terrorism and violent extremism.

3. (1) The two foreign ministers also exchanged views on the South China Sea issues and confirmed they would cooperate while pursuing mutual communication for peaceful settlement of disputes based on international law, including the United Nations Convention on the Law of the Sea (UNCLOS).

(2) In addition, the two foreign ministers exchanged views on the North Korea situation, condemned the recent nuclear test by North Korea, and shared the view that they  would ask North Korea to fulfill the relevant UN Security Council resolutions.

(3) Furthermore, the two foreign ministers shared the view that the next 2+2 would be held in Indonesia at an appropriate time.