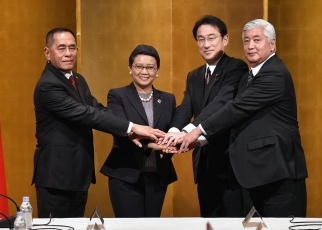 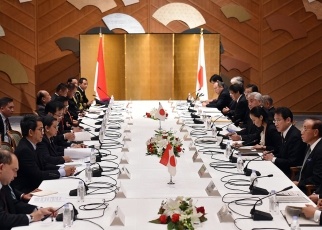 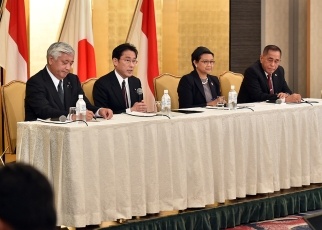 On Thursday, December 17, for approximately 100 minutes from 2:30 p.m. to around 4:10 p.m., Mr. Fumio Kishida, Minister for Foreign Affairs of Japan and Mr. Gen Nakatani, Minister of Defense of Japan held the first Japan-Indonesia Foreign and Defense Ministerial Meeting in Tokyo with H. E. Ms. Retno Marsudi, Minister for Foreign Affairs of the Republic of Indonesia and H. E. Gen. (ret.) Ryamizard Ryacudu, Minister of Defense of the Republic of Indonesia, who are visiting Japan. The overview is as follows.

Both countries welcomed the fact that the Foreign and Defense Ministerial Meeting was held for the first time between Japan and Indonesia as well as between Japan and an ASEAN member state, and stated that as a maritime nation and a strategic partner who share fundamental values,  they intended to hold discussions about their cooperation in the area of maritime security, counter-terrorism, and other areas in order to strengthen the security and defense cooperation between the two countries and to contribute to the peace and security of the region.

The Japanese side explained that Japan is strengthening its cooperation with its partner countries, particularly the ASEAN countries, under the banner of ''Proactive Contributor to Peace'' and that it would be possible for Japan to further fulfill its responsibility toward the peace and prosperity of the world with the new Legislation for Peace and Security approved in September this year, and emphasized that there would be no change to Japan's orientation as a peace loving country which it has consistently adhered to for the 70 years since the end of the WWII. In response to this, the Indonesian side stated that the establishment of Japan's new Legislation for Peace and Security would further strengthen the relationship between Japan and Indonesia, countries who share values, in the area of security cooperation.

The Japanese side stated Japan's intention to seamlessly support maritime security capabilities of the ASEAN countries, welcomed how both sides concurred to initiate negotiations on an agreement on the transfer of defense equipment and technology, and stated that going forward Japan would strive to develop security and defense cooperation, including in the area of defense equipment. Moreover, the Japanese side stated that Japan intended to further promote its effort to enhance Indonesia's capability to secure the safety of its oceans and skies and to respond to disasters, through active participation in the multilateral joint exercise KOMODO 2016 and capacity building assistance, which the Indonesian side welcomed Japan's proposals. Both countries decided to hold the Politico-Military (PM) and Military-Military (MM) Dialogues in 2016.

The Japanese delegation stated that Japan supports and would collaborate closely on the proposal of Indonesia to include maritime cooperation as a priority area of East Asia Summit (EAS) cooperation, while steadily implementing of the content agreed in the Kuala Lumpur Declaration on the 10th Anniversary of the Establishment of EAS.
Furthermore, both countries affirmed that they place importance on ASEAN Defense Ministers Meeting-Plus (ADMM-Plus) and their intention that Japan and ASEAN would coordinate even more closely. The Japanese side proposed the holding of the second round of Japan-ASEAN Defense Ministers Informal Meeting in 2016 in order to strengthen defense cooperation between Japan and ASEAN.  The Indonesian side highly valued this proposal and expressed their intention to cooperation with Japan on this matter.

The Japanese side stated that unilateral actions, such as large scale and rapid land reclamation, building of outposts in the South China Sea, use of the South China Sea for military purposes, etc that change the status quo and raise tensions, are issues of concern for, not only the parties involved in the conflict, but also for the entire international community; furthermore the Japanese side stated that it is important for ASEAN to send out a message with one voice in order to ensure freedom of navigation and overflight, a basic principle of international law with the active involvement of Indonesia, the central country of ASEAN,. The Indonesian side explained that Indonesia's position regarding the issue of the South China Sea is to urge all parties to avoid taking any actions that raise tensions and to call for respect for international law. They also pointed out that a resolution of the conflict through peaceful means based on dialogue is important, while explaining the situation regarding the Natuna Islands.
Moreover, the Japanese side stated that Japan-China relations is improving as a whole and that Japan intends to deepen dialogue with China, while continuing to make the claims that should be made.  Furthermore, the Japanese side stated that the serious situation in the East China Sea is continuing and that, Japan has concerns about unilateral escalations, including repeated intrusions into Japan's territorial sea and unilateral resources development in the maritime area pending delimitation, etc., and that Japan will take a calm but resolute approach to the situation.
Furthermore, the Japanese delegation pointed out North Korea's continued development of nuclear missiles, a clear violation of the United Nations Security Council resolutions, and stated that Japan hoped to cooperate with Indonesia to call on North Korea to refrain from provocations and comply with United Nations Security Council resolutions, etc. Furthermore, the Japanese delegation expressed the view that the abduction issue is the most important issue of the Abe administration as it concerns the sovereignty of Japan and lives and safety of its citizens, and stated that Japan seeks for understanding and cooperation of Indonesia for an early resolution of the issue.

The Japanese delegation explained that the recent terrorist attacks in Paris were an attack against the values that we share, that the international community must unite and resolutely condemn them, that Japan intends to collaborate closely with the countries concerned to fulfill its responsibilities in the international community with respect to the threat of ISIL and other terrorist organizations, and that recently it had newly established the Counter Terrorism Unit - Japan, and pointed out the importance of Indonesia's role as the country with the world's largest population of Muslims. Both countries agreed to strengthen their cooperation in the area of counter-terrorism.

Both countries confirmed that this meeting was an opportunity to show the world that the two countries intended to cooperate with each other based on their strategic partnership, and agreed to collaborate more closely in order to become a driving force for the peace, stability and prosperity of this region and the world.
The Indonesian delegation made that Indonesia would like to hold this meeting on a regular basis, every two years, and the Japanese side welcomed this proposal.