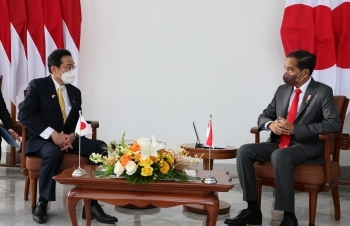 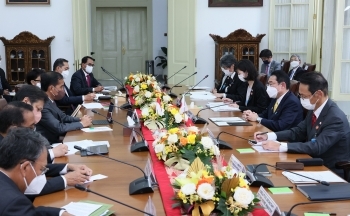 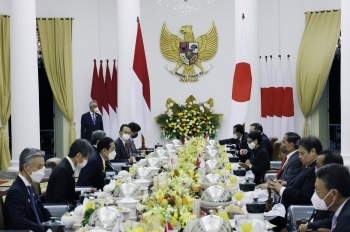 On April 29, commencing at 4:13 p.m. local time (6:13 p.m. Japan time) for approximately 90 minutes, Mr. KISHIDA Fumio, Prime Minister of Japan, who is currently visiting Indonesia, held a Japan-Indonesia Summit Meeting with H.E. Mr. Joko Widodo, President, the Republic of Indonesia, at the presidential palace. The overview of the meeting is as follows. The meeting was attended on the Japanese side by officials including Deputy Chief Cabinet Secretary ISOZAKI Yoshihiko and Dr MORI Masafumi, Special Advisor to the Prime Minister, and on the Indonesian side by officials including Coordinating Minister for Economic Affairs Airlangga Hartarto, Minister for Foreign Affairs Retno Marsudi, Minister of Trade Muhammad Lutfi, Minister of Transportation Budi Karya Sumadi, Minister of Energy and Mineral Resources Arifin Tasrif and Cabinet Secretary Pramono Anung. A one-on-one meeting of the two leaders just with interpreters was held for the first 30 minutes of the summit. Alongside the summit, a welcoming ceremony, a tree planting ceremony, a joint press occasion and a dinner hosted by President Joko and his spouse were held.

At the outset, President Joko expressed his intention to further strengthen the strategic partnership between the two countries in close cooperation with Prime Minister Kishida. In response, Prime Minister Kishida stated that the two countries face many challenges, including the situations in Ukraine, the East and South China Seas and North Korea, and that it is even more important to maintain and strengthen a free and open international order based on the rule of law. Prime Minister Kishida also expressed his firm opposition to any actions that threaten shared principles and his desire to further promote cooperation to realize a Free and Open Indo-Pacific (FOIP) and the ASEAN Outlook on the Indo-Pacific (AOIP).

3 Regional situations and cooperation in the international arena