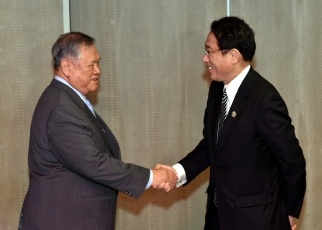 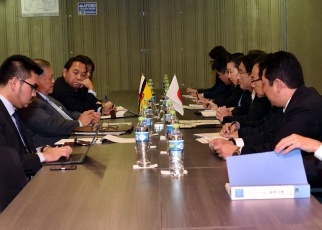 1. (1) In his opening remarks, Foreign Minister Kishida explained that he hopes to collaborate closely with Brunei, which is the coordinating country for the Association of Southeast Asian Nations (ASEAN) with Japan in order to further advance not only Japan-Brunei relations but also Japan-ASEAN relations.

(2) Furthermore, Minister Kishida stated that Japan intends to cooperate on Brunei's industrial diversification, and he introduced the "Innovative Asia," a project for developing advanced human resources, which will begin from the next fiscal year.

2. (1) In response, Minister Lim stated that Brunei is serving as the ASEAN coordinating country for Japan until 2018, and he is looking forward to this opportunity to be able to exchange views on the relationship between ASEAN and Japan.

(2) Additionally, Minister Lim explained that the price of crude oil has been slumping recently, and he intends to use this opportunity to diversify Brunei's economy. Furthermore, Minister Lim stated that he also hopes to discuss energy cooperation.

(3) In addition, Minister Lim explained that Brunei has just implemented a certain amount of easing of import restrictions, but he will be in contact again after reconfirming.

3. The two ministers also held a meaningful exchange of views on cooperation in the region. The two ministers shared information on the state of domestic procedures for ratifying the Trans-Pacific Partnership (TPP), and shared the view to unite their efforts to bring the TPP into force, along with to coordinate to promote the Regional Comprehensive Economic Partnership (RCEP).