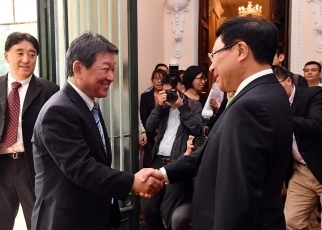 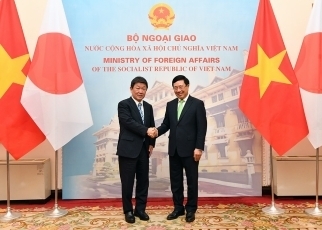 1. On Monday, January 6, commencing from around 11:30 a.m. (local time; around 1:30 p.m. Japan time) for approximately 1 hour, Mr. MOTEGI Toshimitsu, Minister for Foreign Affairs of Japan, who is visiting Hanoi, Viet Nam, held a Foreign Ministers’ Meeting with H.E. Mr. Pham Binh Minh, Deputy Prime Minister and Minister of Foreign Affairs of the Socialist Republic of Viet Nam, followed by a working lunch for approximately 1 hour. The overview of the meetings is as follows.

2. At the outset, Minister Motegi stated to Deputy Prime Minister Minh that the fact that he had chosen Viet Nam as the first destination on his current visit to Southeast Asia symbolizes the importance of Viet Nam as a partner of Japan in regional and global fora. Furthermore, he emphasized that this year, in which Viet Nam holds both the ASEAN Chairmanship and a seat on the United Nations (UN) Security Council, offers an opportunity to further deepen “the Extensive Strategic Partnership” between Japan and Viet Nam (PDF).

3. Deputy Prime Minister Minh welcomed that the first official guest he received in 2020 was a Japanese Foreign Minister. He also stated that it was delightful that “the Extended Strategic Partnership” between Japan and Viet Nam has been successfully developing. Furthermore, Deputy Prime Minister Minh welcomed the leading and proactive role of Japan in the region and the international arena and expressed his intention to further develop bilateral relations.

In addition, the two ministers exchanged views on the promotion of economic cooperation and cooperation in relation to the appropriate operation of the system of the new Status of Residence in Japan, “Specified Skilled Worker,” as well as on cooperation towards the early signing of the Regional Comprehensive Economic Partnership by 16 countries and the steady implementation and expansion of the TPP11 Agreement.

5. The two ministers also discussed ASEAN-related issues and other regional and global affairs, and exchanged views on matters such as the South China Sea issue and the North Korean situation. Regarding the North Korean situation, both ministers shared the intention to work closely together towards the complete denuclearization of North Korea, including the full implementation of the UN Security Council resolutions. Furthermore, Minister Motegi sought understanding and cooperation for the early resolution of the abductions issue and obtained Deputy Prime Minister Minh’s support.

6. Following the meeting, Exchange of Notes were signed in relation to the yen loan for the development of the sewage system in Ha Long City (total loan provision of up to 11.891 billion yen) and the grant aid for the provision of equipment to analyze and assess dioxin-contaminated soil (total provision of 300 million yen). Afterwards, the two ministers held a joint press announcement.