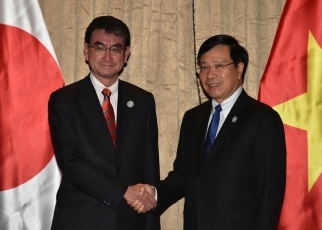 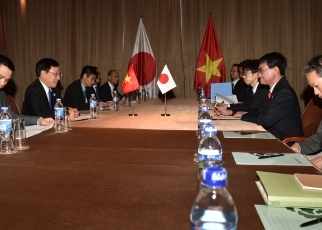 1 At the beginning, Minister Minh welcomed Minister Kono’s visit to Viet Nam and his attendance at the APEC meeting, congratulated him on his recent reappointment as Minister for Foreign Affairs, and explained that he hopes to exchange views on developing the relationship between the two countries and the success of APEC. Minister Kono stated that he is happy to be visiting Viet Nam for the first time in 25 years, expressed sympathy for the typhoon damage recently suffered by Viet Nam, and stated that Japan has decided to provide emergency assistance, and prays that Viet Nam will recover as quickly as possible. In addition, Minister Kono also stated that he intends to do his utmost to cooperate for the success of APEC, and hopes to exchange views on further strengthening the two countries’ “Extensive Strategic Partnership” as well as measures for realizing a free and open Indo-Pacific.

2 With regard to Japan-Viet Nam relations, Minister Minh expressed the view that Viet Nam-Japan relations are extremely favorable, explained that he hopes to make the best use of next year’s 45th anniversary of the establishment of diplomatic relations as an opportunity to undertake a large number of activities in the two countries, and expressed gratitude for Japan’s cooperation through Official Development Assistance (ODA). Minister Kono stated that he intends to promote cultural and people-to-people exchanges through a variety of events that will be held during next year’s 45th anniversary, explained that he hopes to promote cooperation in areas such as the Japan-Viet Nam University and administrative reform through the training of senior party officials, expressed thanks for Viet Nam’s support for Japan’s Free and Open Indo-Pacific Strategy, and stated that Japan intends to further strengthen cooperation in the maritime security field, including by providing new patrol vessels. Furthermore, the two ministers confirmed that they will coordinate in order to hold the 10th meeting of the Japan-Viet Nam Cooperation Committee in Hanoi next year.

3 The two ministers exchanged views on regional and international affairs such as APEC, the Trans-Pacific Partnership (TPP), North Korea and the South China Sea.

(1) With regard to APEC, Minister Minh expressed gratitude for Japan’s cooperation at this year’s Viet Nam - APEC, explained that being able to secure the attendance of Mr. Shinzo Abe, Prime Minister of Japan, and Minister Kono at the summit and ministerial meetings is strategically very significant, and stated that he intends to coordinate to make APEC successful. Minister Kono stated that economic development in the Asia-Pacific region has progressed rapidly since APEC was launched and there is also substantial future potential. Minister Kono explained that Japan intends to do its utmost to cooperate in order to enhance APEC’s role in achieving the liberalization of investment and trade.

(3) With regard to North Korea, Minister Kono stated that now is the stage to fully implement the United Nations Security Council (UNSC) resolutions, and Minister Minh stated that Viet Nam will continue to comply with the relevant UNSC resolutions.