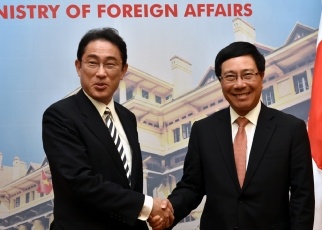 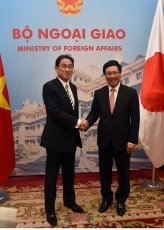 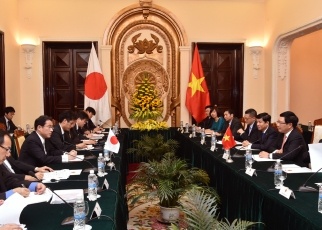 Deputy Prime Minister Minh gave a heartfelt welcome to Foreign Minister Kishida on his visit to Viet Nam and offered words of sympathy and condolence for damages from the recent earthquake in Kumamoto Prefecture. He also expressed hope that today's meeting would be fruitful in further advancing the direction of cooperation agreed upon in the Joint Vision Statement on Japan-Viet Nam Relations issued in September 2015 during the visit to Japan by H.E. Dr. Nguyen Phu Trong, General Secretary, Central Committee of the Communist Party of Viet Nam. Foreign Minister Kishida offered congratulations on the success of the 12th National Party Congress in January 2016 and selection of Deputy Prime Minister Minh as a member of the Politburo at that Congress. He also noted Japan's intent to strengthen cooperation in all areas with the new leadership within the framework of the Extensive Strategic Partnership, the importance of visits by officials and interactions by political and economic leaders, and a desire to promote relations together. He voiced gratitude for the words of condolence by Deputy Prime Minister Minh regarding damages from the recent earthquake in Kumamoto Prefecture.

Deputy Prime Minister Minh expressed satisfaction with advances by Japan-Viet Nam relations, explained that a document adopted at the recent National Congress cited Japan as Viet Nam's most important and long-term partner, and commented that Viet Nam aims to continue strengthening cooperation in all areas within the framework of the Extensive Strategic Partnership. He also voiced appreciation for the invitation to H.E. Mr. Nguyen Xuan Phuc, Prime Minister of the Socialist Republic of Viet Nam, to the G7 Outreach Meeting and commented that Viet Nam hopes to collaborate closely with Japan at the Meeting and Prime Minister Phuc intends to actively contribute the Meeting's success. Additionally, he explained that Viet Nam hopes to strengthen Strategic Partnership Dialogue and other dialogue between Foreign Ministries of the two countries and bolster defense-related cooperation based on the memorandum regarding cooperation between defense authorities signed in September 2015. On the maritime issue, he expressed gratitude for cooperation extended by Japan to Viet Nam's maritime law enforcement agency by furnishing used vessels and requested ongoing cooperation toward realizing prompt provision of newly-built patrol vessels.

Foreign Minister Kishida welcomed advances in bilateral relations since fall 2015, including the visit by General Secretary Trong, bilateral discussions on the Japan-Viet Nam Strategic Partnership Dialogue and other matters, and the first official visit to Viet Nam by the President of the House of Councilors. He also noted that Japan has been assisting economic advances in Viet Nam, a regional driver, through ODA and that it recognizes the current serious problem posed by drought and saltwater damage in Viet Nam and intends to carefully review specific assistance for related measures together with Viet Nam. Furthermore, he mentioned Japan's interest in closely collaborating with Viet Nam, including maritime security cooperation, and commented that Japan intends to promptly supply additional vessels, besides the six used vessels already supplied, and other coast guard equipment to strengthen Viet Nam's maritime law enforcement capabilities. Foreign Minister Kishida noted that Japan is conducting a survey regarding the provision of newly-built patrol vessels and hopes to respond on this request in a timely manner.

3.Cooperation in regional and international arenas

On the topic of regional and international issues, Foreign Minister Kishida stated that Japan is placing emphasis on a stronger ASEAN Community, steady reinforcement of the East Asia Summit, and responses to pressing regional issues such as the South China Sea problem and North Korea problem at this year's ASEAN-related meetings. Additionally, the two Ministers shared concerns about unilateral attempts to change the status quo in the South China Sea and awareness of the importance of ASEAN sending a unified message on this matter, and agreed on the importance of the rule of law, peaceful settlement of conflicts in accordance with international laws, and freedom of navigation and flights.

Deputy Prime Minister Minh expressed gratitude for Japan's cooperation with ASEAN up to now and requested continued support for ASEAN's centrality. He also welcomed the speech that Foreign Minister Kishida delivered in Bangkok on May 2 and commented on the importance of connectivity in the relationship between ASEAN and Japan which is in line with Viet Nam's view.

Regarding the North Korea problem, Foreign Minister Kishida explained that Japan takes North Korea's continuation of nuclear weapon and missile developments very seriously, that it is important to increase pressure on North Korea, including strict enforcement of Security Council resolutions, and that Japan hopes to cooperate with ASEAN in addressing the abductions issue and other human rights violations by North Korea. Deputy Prime Minister Minh noted that Viet Nam has consistently taken a stance against the abductions and that it supports strict enforcement of United Nations Security Council resolutions aimed at denuclearization of the Korean Peninsula.