Summit Meeting of Prime Minister Abe and the General Secretary, Central Committee of the Communist Party of Viet Nam 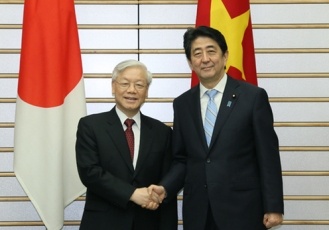 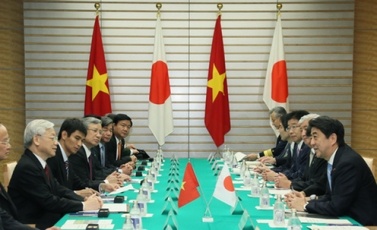 Photo: Cabinet Public Relations Office
On September 15, commencing at 6:30 p.m. for approximately one hour and ten minutes, Mr. Shinzo Abe, Prime Minister of Japan, held a summit meeting with H.E. Dr. Nguyen Phu Trong, General Secretary, Central Committee of the Communist Party of Viet Nam, Socialist Republic of Viet Nam, who is paying an official visit to Japan. The overview of the meeting is as follows. After the meeting, both sides announced the Joint Vision Statement (PDF)

on Japan-Viet Nam Relations, and signed and exchanged an official document on yen loans to Viet Nam and some documents on cooperation between Japan and Viet Nam in agriculture, peace-keeping operations (PKOs), maritime security and other fields. The two leaders also held a joint press conference following the meeting.

Prime Minister Abe expressed his congratulations on the 70th anniversary of the foundation of Viet Nam on September 2, and outlined how Japan is envisioning its desired path for the future as announced last month in the Prime Minister's statement, namely to learn from history and firmly maintain that position in successive cabinets. The Prime Minister also stated his hope for Japan to play a greater role in maintaining peace and stability in the region and the international community from the position of the "Proactive Contribution to Peace," based on the path Japan has followed as a peace-loving nation for the past 70 years since the end of World War II. In response, General Secretary Nguyen Phu Trong expressed his strong admiration of Japan as a country that has learned from history and followed the path of a peace-loving nation that has positively contributed to regional and global peace and stability, and indicated Viet Nam's support of Japan's proactive contribution to peace and development in the region and the world.
The two sides expressed their serious concerns over the continuation of unilateral actions in the South China Sea, including large-scale land reclamation and the building of outposts, which have increased tensions and will change the status quo in the region. Prime Minister Abe stated that based on the request of Viet Nam, Japan has decided to furnish the country with additional used vessels, and confirmed that both countries will continue to hold discussions for realizing the prompt provision of newly-built patrol vessels. The Prime Minister also indicated his hopes for strengthening cooperation between the coast guard agencies and defense authorities of both countries. General Secretary Nguyen Phu Trong expressed his appreciation for Japan's assistance to Viet Nam's maritime law enforcement agencies while also requesting greater cooperation on non-traditional security issues, and agreed on the strengthening of cooperation between the maritime law enforcement agencies and defense authorities of both countries.

Prime Minister Abe indicated his wish for the continued active and mutual visits of VIPs through the new leadership that will emerge from the National Congress of the Communist Party of Viet Nam next year, while also stating the Japanese Government's decision to extend for a maximum of 10 years the validity period of multiple business visas for Vietnamese nationals and expressing his hope for active exchanges between the people of Japan and Viet Nam. The Prime Minister also expressed his delight at the progress of economic exchanges with Viet Nam, and, with a focus on cooperation in human resources development, he indicated his hope for continued cooperation in the opening of a Master's Program next September as a part of the Japan-Viet Nam University Project.

Furthermore, Prime Minister Abe stated that under the recently-announced Partnership for Quality Infrastructure, Japan will provide as much assistance as possible in order to maintain Viet Nam's infrastructure. Additionally, based on the request of Viet Nam, the Prime Minister indicated that Japan will provide approximately 100 billion yen in loans for a total of four projects, including the North-South Expressway Project, two projects relating to the Lach Huyen Port Infrastructure (port, road, and bridge), and the Support Program to Respond to Climate Change.
Prime Minister Abe also expressed his wish for joint efforts to further advance bilateral cooperation in the field of agriculture, a point of focus for Viet Nam, under the Japan-Viet Nam Medium-Long Term Vision On Agricultural Cooperation, which was approved during a recent (August) visit to Viet Nam by Mr. Yoshimasa Hayashi, Minister of Agriculture, Forestry and Fisheries. The Prime Minister also indicated his pleasure at the opening of Viet Nam's market on September 17 to exports of Japanese apples, and the opening of Japan's market to the import of mangoes from Viet Nam, also on the 17th of this month.

In response to this, General Secretary Nguyen Phu Trong stated that, as a consistent policy, Viet Nam considers Japan to be a leading partner, and that the aim of this and future visits to Japan is to further comprehensively develop and promote an extensive strategic partnership between the two countries. To this end, it is important to further strengthen political trust, reinforce economic connectivity, and consolidate cooperation in the regional and international arena. General Secretary Nguyen Phu Trong indicated his hope to deepen the exchanges between Japan and Viet Nam, including high-level bilateral visits, and expressed his appreciation of the relaxing of visa regulations.

General Secretary Nguyen Phu Trong also expressed his appreciation for the ODA Viet Nam has received from Japan for many years and which has greatly benefitted the country's economic and social development, while also praising the Partnership for Quality Infrastructure and indicating Viet Nam's hope to continue to receive cooperation from Japan under the Partnership. General Secretary Nguyen Phu Trong stated that cooperation in agriculture is very important for an agricultural nation such as Viet Nam, and that under the Japan-Viet Nam Medium-Long Term Vision On Agricultural Cooperation Viet Nam will make further efforts to advance cooperative relations with Japan.

4 Cooperation in the Regional and International Arena

Prime Minister Abe expressed his appreciation for the support of Viet Nam for the proposal to designate the 5th of November as World Tsunami Day. Both sides also agreed to cooperate for the success of Viet Nam as the APEC host country in 2017.
In addition, the two sides exchanged opinions on North Korea, including the abduction issue, and reforms of the UN Security Council, and confirmed their wish to continue working together closely for the early conclusion of the negotiations of the Regional Comprehensive Economic Partnership (RCEP) and the Trans-Pacific Partnership (TPP).