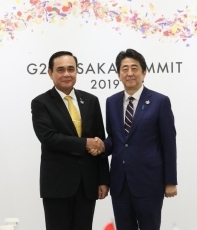 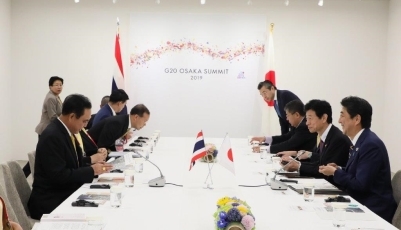 2. With regard to ASEAN, Prime Minister Abe, bearing in mind that Thailand is the ASEAN chair this year, stated that “In the ASEAN-related Summit Meetings, we would like to send a strong message on the issues such as North Korea, the South China Sea and connectivity among other things.” Prime Minister Prayut stated that he would like to cooperate towards the conclusion by the end of the year of the Regional Comprehensive Economic Partnership (RCEP) and also expressed his intention that as respective chairs of the G20 and ASEAN, Japan and Thailand should cooperate in leading the discussions in ASEAN.

3. Concerning the situation in North Korea, Prime Minister Abe emphasized “the importance of the full implementation of the relevant United Nations Security Council (UNSC) resolutions” and expressed that he “hopes for understanding and cooperation towards an early resolution of the abductions issue”. Prime Minister Prayut responded by saying that Thailand has strictly implemented the UNSC resolutions.

4. The two leaders also exchanged views on the G20 Summit and the East Economic Corridor development in Thailand among other things.