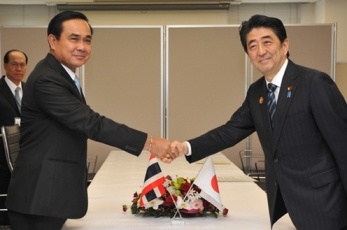 On March 14, commencing at 12:20 p.m. for approximately 40 minutes, Prime Minister Shinzo Abe met with H.E. Mr. Prayut Chan-o-cha, Prime Minister of the Kingdom of Thailand, who was visiting Sendai in order to attend the Third UN World Conference on Disaster Risk Reduction. An overview of the meeting is as follows.

1. At the beginning, Prime Minister Abe welcomed Prime Minister Prayut’s visit to Japan following his visit last month, and stated his desire to proactively cooperate with Thailand’s railway development projects, referring to the fact that Prime Minister Prayut had used the Tohoku Shinkansen to Sendai. Both leaders shared the view to accelerate consultations between the two countries based on the Memorandum of Intent on Cooperation of the Railway Sector.

3. Prime Minister Abe sought appropriate measures based on the requests from Japanese businesses concerning Thailand’s new investment promotion policy, and strongly sought the early abolishment of Thailand’s food import restrictions (against Miyagi, Fukushima and Gunma Prefectures) following the Great East Japan Earthquake Disaster, and stated his hope to have Prime Minister Prayut enjoy the safe and delicious food of Miyagi Prefecture on this occasion. In response, Prime Minister Prayut responded that he would like to enhance the investment environment while giving due respect to the opinions of Japanese businesses, and that he accelerated deliberations aimed at easing the restrictions on food imports and he wish to provide good news in the near future. Both leaders also shared the view to promote cooperation under the Japan-Thailand Economic Partnership Agreement (JTEPA).

4. Prime Minister Abe again sought steady progress in the democratization process including the prompt implementation of elections. The two leaders also shared the view to promote cooperation on security through dialogues between the foreign and defense ministries of the two countries.