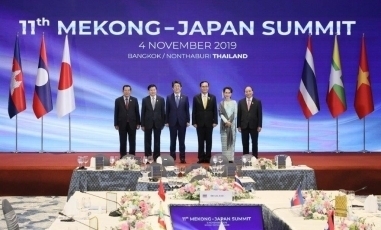 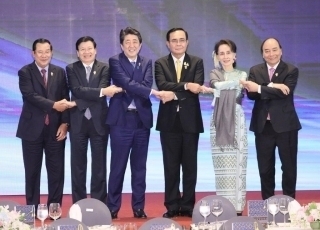 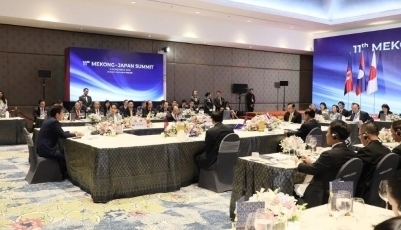 was adopted, together with “The Mekong-Japan Initiative for SDGs toward 2030(PDF)

(1) Prime Minister Prayuth of Thailand, co-chair of the meeting, stated the following.
I am pleased that we are holding the 11th Mekong-Japan Summit. At this meeting, I hope we can review Mekong-Japan cooperation under the Tokyo Strategy 2018 adopted at last year’s summit and discuss the future direction of Mekong-Japan cooperation. I welcome that Japan became an ACMECS (Ayeyawady-Chao Phraya-Mekong Economic Cooperation Strategy) development partner. I also welcome that “The Mekong-Japan Initiative for SDGs toward 2030” will be adopted at this meeting. We will steadily implement Mekong-Japan cooperation in line with the Tokyo Strategy 2018 and “The Mekong-Japan Initiative for SDGs toward 2030.”
(2) Prime Minister Abe, co-chair of the meeting, stated the following.
We are in year one of the cooperation under the Tokyo Strategy 2018 adopted last year. Over the past year, Japan has strongly supported the development of the Mekong countries. Japan fully endorses the leadership of Thailand, the co-chair of the meeting, and the proactive initiatives of the Mekong countries, and Japan will continue to support them. “The Mekong-Japan Initiative for SDGs toward 2030” supports the sustainable development of the Mekong region, and at the same time, symbolizes the “strategic partnership” between Japan and the Mekong region. Japan will work to build a partnership that will elevate each other, supporting the Mekong countries’ own initiatives while being mindful of the people of the Mekong countries and their societies.

(1) Prime Minister Abe stated the following.
The goal of “The Mekong-Japan Initiative for SDGs toward 2030” is to draw out the Mekong region’s potential in an optimal manner. While making use of quality infrastructure investment in accordance with international standards, Japan intends to address the following three fields as areas of priority: (1) environmental and urban issues; (2) sustainable natural resource management and utilization; and (3) inclusive growth. Through efforts in each of the three areas, Japan will contribute to: (1) reinforcing the resilience of the region and society; (2) maintaining and strengthening the region’s growth ability; and (3) ensuring that social development leads to improving the standard of life of everyone.
In particular, with regard to (1) environmental and urban issues, Japan will share with the Mekong countries the “Osaka Blue Ocean Vision” adopted at the G20 Summit in Osaka, and hopes that Japan and the Mekong countries can jointly aim for reducing new pollution by marine plastic litter to zero by 2050. With regard to (2) sustainable natural resource management and utilization, it is important that water resources be managed under an open framework, and Japan will enhance its coordination with the Mekong River Commission. With regard to (3) inclusive growth, in the area of education and human resource development, Japan is committed to advancing efforts under the “G20 Initiative on Human Capital Investment for Sustainable Development” and the “Industrial Human Resource Development Cooperation Initiative 2.0.” Japan will implement such initiatives through public-private partnerships, based on a cross-regional and open approach. In addition, the Green Mekong Forum, which has been held jointly by the public and private sectors, will be elevated to the Mekong-Japan SDGs Forum from next year.
Regarding the progress made in projects under the Tokyo Strategy 2018, this year, Japan has steadily implemented projects that contribute to enhancing regional connectivity, including development of the Sihanoukville Port in Cambodia, reconstruction of the bridges on the National Road No.9 in Lao PDR, and expansion of the Thilawa Port in Myanmar. Furthermore, the Mekong countries and Japan established the “Mekong Industrial Development Vision 2.0 (MIDV2.0)” in September 2019 and have adapted to new developments such as digitalization.
For the Mekong-Japan Exchange Year 2019, more than 120 cultural and exchange events were implemented and authorized in Japan and the Mekong countries. This was a valuable year in which exchanges of a new era blossomed, founded on our multi-layered friendly relations over many years. In particular, I appreciate the high praise received from the leaders of the Mekong countries for our “WA-Project.” Japan will continue to make use of such meaningful programs to further deepen its exchanges with the Mekong countries.
(2) In response, the Mekong countries, including co-chair Thailand, stated to the following effect.
We appreciate Japan’s continuous supports for the Mekong region. We commend that the Mekong-Japan cooperation has made definitive progress under the Tokyo Strategy 2018. We welcome that Japan has become an ACMECS development partner. We hope that cooperation will deepen in areas such as energy, water resource management, and human resource development for the sustainable growth of the Mekong region. We welcome that people-to-people exchanges were promoted under the Mekong-Japan Exchange Year 2019 program.

Prime Minister Abe commented on regional affairs, including North Korean affairs and the South China Sea issue. Regarding North Korean affairs, Prime Minister Abe stated that it is important to fully implement United Nations Security Council resolutions and asked for understanding and cooperation toward the early resolution of the abductions issue. The leaders of the Mekong countries stated that they share Japan’s concerns over North Korea issues, noting that peace and stability are essential for the development of the region, and expressed understanding for the abductions issue.

At the end of the meeting, the leaders of Japan and the Mekong countries confirmed that they will hold the next Mekong-Japan Summit on the occasion of the ASEAN-related summit meetings, which will be held in Viet Nam next year.
[Reference] Attendees from the Mekong countries