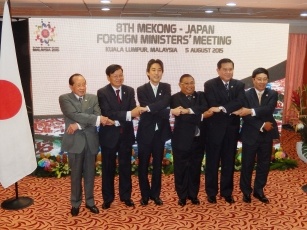 and the Chair's Statement (PDF)

(1) At the outset State Minister Kiuchi expressed his condolences regarding the damage caused by the recent flooding in Myanmar. He also expressed his gratitude for the cooperation of the Mekong countries in making the Seventh Mekong-Japan Summit Meeting held in Tokyo in July such a success, including the unanimous adoption of the ''New Tokyo Strategy 2015'' as a strategy for Mekong-Japan cooperation over the coming three years. As the person who had hosted the Japan-Mekong Senior Officials' Meeting (SOM) in Hamamatsu City and had been involved in the formulation of the ''New Tokyo Strategy 2015,'' he expressed his own pleasure at the summit meeting's success.

(2) State Minister Kiuchi stated that the Mekong region, which is achieving remarkable growth, is an extremely important partner for Japan, in both economic and strategic terms. In order to work together towards the realization of ''quality growth'' in the Mekong region, Minister Kiuchi reiterated that Japan will promote  concrete measures, including the provision of 750 billion yen of Official Development Assistance (ODA) in support to the Mekong region over the next three years, in line with the four pillars of the new strategy ((a) ''Hard'' efforts; (b) ''Soft'' efforts; (c) Realization of a green Mekong; and (d) Coordination with various stakeholders).

(3) State Minister Kiuchi stated that over the 70 years since the end of World War II, as a peace-loving nation walking with Asia, Japan has been making every possible effort to achieve peace and prosperity in Asia. He provided examples of such efforts, noting the first High-Level Seminar on Peacebuilding, National Reconciliation and Democratization in Asia that had been held in Tokyo in June, and also the announcement of 3.5 million US dollars in additional assistance in response to stranded persons in the Indian Ocean, and stated that Japan will continue to engage even more actively in peacebuilding efforts in Asian under its policy of ''Proactive Contribution to Peace.''

2 Mekong-Japan cooperation based on the ‘‘New Tokyo Strategy 2015’’

(1) In terms of the specific measures to be implemented under Mekong-Japan cooperation in line with the four pillars of the ''New Tokyo Strategy 2015,'' an overview of the explanations provided by State Minister Kiuchi is as follows.

i) Pillar 1: ''Hard'' efforts
Minister Kiuchi explained that in addition to the construction of infrastructure, Japan also places importance on contributing to local society and economy, such as human resources development through contribute to local society and economy, the sharing of know-how and technology transfer contribute to local society and economy, and local employment creation, as well as mentioning Japan's achievement to date in the areas of development of port systems and airport operations. He reiterated that, based on the ''Partnership for Quality Infrastructure,'' in collaboration with the Asian Development Bank (ADB), Japan is committed to promote ''quality infrastructure investment'' totaling approximately 110 billion U.S. dollars over a five-year period, by pursuing both qualityand quantity in Asia. These efforts will respond to the economic and development strategies of the region and consider such points as the benefits for residents, life-cycle costs, disaster management countermeasures and environmental impact.

ii) Pillar 2: ''Soft'' efforts
Minister Kiuchi stated that the Mekong region, where dynamic economic growth is continuing, is a priority region for Japan's economic diplomacy and that the entry of Japanese companies into the markets of the Mekong region, which has already increased dramatically in recent years, should be advanced further. He also referred to the ''Public-Private Cooperation in the Mekong Region, The Fifth Mekong-Japan Meeting'' that he had chaired earlier this year in February, stating that Japan will continue to actively enhance public-private partnership and promote the expansion of Japanese businesses in the region. In this regard he also stated that the vitality of the private sector should be actively utilized and requested the Mekong countries to further develop the investment environment to this end.
Furthermore, Minister Kiuchi announced that efforts will be made to promote measures in various other sectors, such as human resource development, including industrial human resources; and cultural and people-to-people exchanges, such as the ''WA Project,'' which promotes two-way arts and cultural exchange and Japanese language learning assistance.

iii) Pillar 3: Realization of a green Mekong
Minister Kiuchi noted that towards the realization of ''quality growth'' in the Mekong region it is necessary to engage in measures to enhance regional resilience, through responses to various issues, including disaster reduction, the environment and climate change, energy, and water resource management. He announced that based on the ''Sendai Declaration'' and ''Sendai Framework for Disaster Risk Reduction 2015-2030'' adopted at the Third United Nations (UN) World Conference on Disaster Risk Reduction, efforts will be made to tackle the prevention and reduction of disaster risk, which could impede sustainable development in the Mekong region.
Minister Kiuchi also noted that the New Strategy refers to the designation of a ''World Tsunami Day,'' international advocacy efforts concerning the importance of highly efficient coal-fired power generation, and the promotion of cooperation on sustainable use of aquatic fishery resources, including cetaceans.

iv) Pillar 4: Coordination with various stakeholders
Minister Kiuchi noted the importance of efficient assistance through enhanced coordination among stakeholders, given the high degree of interest in the Mekong region by diverse stakeholders. In order to respond to development-related demand, including vast infrastructure demand, in Asia and across the Mekong region, further efforts will be made to enhance coordination with international organizations such as the Asian Development Bank (ADB) and the Organisation for Economic Co-operation and Development (OECD), actively utilize private sector funding flows and knowledge, and further promote South-South Cooperation and Triangular Cooperation with Mekong countries.

(2) An overview of the remarks made by the ministers of Mekong countries is as follows.

(1) Minister Kiuchi explained that the ''Legislation for Peace and Security'' currently being deliberated in the Diet represents the practical application of a ''Proactive Contribution to Peace'' based on the principle of international cooperation. In addition, Minister Kiuchi expressed serious concerns about unilateral actions that change the status quo in the South China Sea and East China Sea, and explained the importance of unified ASEAN measures, compliance with international laws and the rule of law at sea.

(2) Among the participating ministers, expressions of support for Japan's ''Proactive Contribution to Peace'' were made, as well as statements which shared concern about the situation in the South China Sea.

(3) Discussions also took place on the issues of North Korea and reform of the United Nations.

(1) The ministers agreed on the importance of achieving ''quality growth'' in the Mekong region and confirmed that they would engage in follow-up on the ''New Tokyo Strategy 2015'' and steadily implement the ''Action Plan'' towards the realization of ''quality growth.''

(2) Furthermore, the ministers expressed their hopes for the success of Lao PDR as Chair of ASEAN in 2016 and agreed that the next Mekong-Japan Foreign Ministers' Meeting will be held in the Lao PDR in 2016.