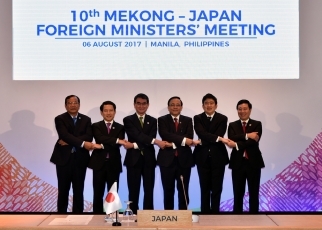 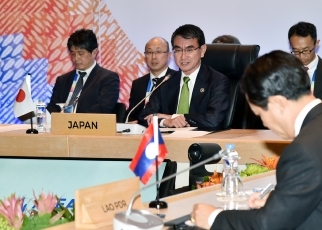 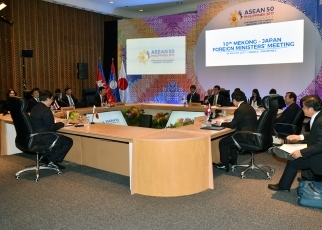 Minister Kono expressed his pleasure that the Mekong-Japan Foreign Ministers’ Meeting is commemorating its 10th anniversary. He noted that Japan has consistently provided assistance to both “hard” infrastructure development and “soft.” He also noted that since the adoption of the New Tokyo Strategy 2015 for Mekong-Japan Cooperation (MJC2015), Japan has promoted assistance to strengthen connectivity and realize a Green Mekong. Minister Kono stated that at this meeting he hoped to look back on the outcomes of the last ten years and to engage in discussions on further challenges relating to connectivity.

(1)Minister Kono made the following remarks on progress in Japan-Mekong cooperation.
i. Over the course of the last ten years the Mekong region has experienced major growth. During the same period Japan has implemented various assistance, such as the development of quality infrastructure, the introduction of export-related facilities, including electronic customs procedures, human resources development, and the development of the East-West Economic Corridor between Thilawa in Myanmar and Pakse in Lao PDR. The implementation of both “hard” and “soft” initiatives has strengthened connectivity in the Mekong region and contributed to the acceleration of growth. Economic exchanges between Japan and the Mekong region have also been invigorated and there is a high degree of interest in the Mekong region among Japanese companies. Japan will make concerted public and private-sector efforts to further advance development in the region. People-to-people exchanges are also very active and through such initiatives as the Japan-East Asia Network of Exchange for Students and Youths (JENESYS) and the WA Project, Japan hopes to further deepen people-to-people connectivity.
ii. The New Tokyo Strategy 2015 is now in its second year and Japan highly values that many projects have been implemented smoothly. Last year the National Road No. 5 improvement project has been impemented. This road forms a part of the Southern Economic Corridor between Cambodia and Thailand. In addition, the North-South Expressway construction project in Viet Nam has been implemented, and a Memorandum of Cooperation between the Ministry of Foreign Affairs of Japan and the Ministry of Foreign Affairs of the Kingdom of Thailand on Industrial Human Resources Development in Thailand has been concluded. These developments demonstrate that initiatives in both “hard” and “soft” areas are being developed, which help strengthen intra-regional connectivity.
iii. The Senior-Level Working Groups Meeting (SLWG), launched in order to realize the Japan-Mekong Connectivity Initiative, has specified ODA projects for priority implementation. To achieve “vibrant and effective connectivity,” it is necessary to respond to various challenges in terms of “soft” infrastructure, such as facilitating and enhancing the efficiency of customs procedures, including single-window procedures, and developing human resources who will be involved in the maintenance and management of infrastructure. Japan proposes to hold a workshop in September this year to which experts from the five Mekong countries will be invited, in order to deepen compatibility and mutual understanding among national customs systems.
iv. Utilizing the Japan-ASEAN Integration Fund (JAIF) that was announced at the first Mekong-Japan Foreign Ministers’ Meeting in 2008, assistance to improve distribution and logistics efficiency along the East-West Economic Corridor and Southern Economic Corridor has now reached the final phase and Japan will be ending its assistance to this project in the near term. In addition, in collaboration with the Asian Development Bank, Japan is currently developing the Mawlamyine to Kawkareik section of the East-West Economic Corridor, which has become a bottleneck. Japan seeks to contribute to improving logistics efficiency.

(2)In response, the Ministers of the Mekong countries welcomed the appointment of Minister Kono as Minister for Foreign Affairs and his attendance at the meeting in the commemorative tenth anniversary year of Japan-Mekong cooperation, noting that Minister Kono is a member of the Mekong family. Ministers expressed appreciation for the assistance that Japan has provided over the course of 10 years that has enabled the societies and economies of the Mekong region to achieve remarkable development and noted that in addition to steadily implementing existing projects, they would work with Japan on various challenges in order to take Japan-Mekong cooperation to the next phase.

(1) Minister Kono stated that the peace and stability of the Mekong region is extremely important for the region as a whole and from this perspective he welcomed the promulgation of the new constitution in Thailand and the peaceful and smooth implementation of local elections in Cambodia. He noted that in order to realize national reconciliation in Myanmar, the Government of Japan will continue to actively advance reconstruction assistance in ethnic minority regions.

(2) With regard to the issue of North Korea, Minister Kono stated that North Korea posed a grave and real threat to the countries assembled at the meeting and that it is necessary to strengthen effective pressure on North Korea. He also expressed the hope that the Mekong countries would demonstrate understanding and cooperation towards the prompt resolution of the abductions issue.

(3) In response, the ministers of the Mekong countries noted the importance of resolving regional disputes by peaceful means and realizing harmony and stability within the region.