Meeting Between Prime Minister Abe and the State Counsellor of Myanmar 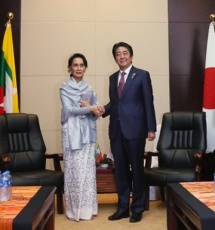 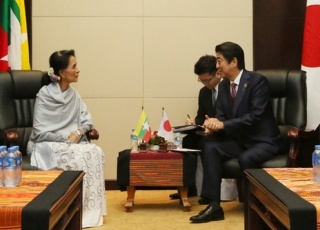 On September 7, commencing at 11:45 a.m. (local time) for approximately 20 minutes, Mr. Shinzo Abe, Prime Minister of Japan, who is visiting Laos for the ASEAN-related Summit Meetings, met with H.E. Ms. Aung San Suu Kyi, State Counssetellor of the Republic of the Union of Myanmar. The overview of the meeting is as follows.

At the outset, Prime Minister Abe expressed his pleasure at having the opportunity to meet for the first time since the establishment of the new government and offered congratulations on the major victory in the previous election (though some time has passed since then). He also voiced congratulations for the success of the 21st Century Panglong Union Peace Conference and full support for efforts by State Counsellor Aung San Suu Kyi for achiving economic development and national reconciliation in Myanmar. He commented that Myanmar is a regional partner that shares fundamental values of freedom, democracy, basic human rights, and rule of law with Japan, that Japan wants to advance the relationship between the two countries working together with State Counsellor Aung San Suu Kyi, and that Japan is inviting her to visit and hopes a visit can happen soon.

In response, State Counsellor Aung San Suu Kyi stated that it was an honor to meet in this manner after a long time since the last meeting. She thanked Prime Minister Abe for the congratulations on the 21st Century Panglong Union Peace Conference and commented that while this initiative is a long road, the passionate desire of the people for peace has enabled the success realized thus far.

2. Bilateral Relationship and Other Points

State Counsellor Aung San Suu Kyi reiterated gratitude for various assistance toward Myanmar’s development provided by Japan and also expressed appreciation for Japan’s strong support of the peace process. Regarding economic development efforts, she mentioned her expectations for the Myanmar’s early approval and implementation of a new investment law that attracts overseas investments. She also commented that she is truly hoping to visit Japan as soon as possible.

In response, Prime Minister Abe explained that Japan has decided to provide a total of roughly 125 billion yen in assistance in areas such as poverty reduction and rural development that State Counsellor Aung San Suu Kyi has emphasized, and wants to contribute to development while bringing about a healthy balance between urban and rural areas. He also explained that Japan agrees that investment by private-sector companies, not just ODA, is very important to Myanmar’s development, as State Counsellor Aung San Suu Kyi noted, and wants to strongly promote private-sector investments through close public-private collaboration. He also expressed great pleasure at the steady progress of the development of the Thilawa Special Economic Zone that is vital to Myanmar’s development. He noted that 39 Japanese companies have already started their business in the area and that Japan wants to cooperate with the government of Myanmar for dealing with fast-growing electricity demand and to distribute Japanese contents by working together with Myanmar’s broadcasting firms.

3. Cooperation in regional and global matters

Prime Minister Abe expressed Japan’s support for ASEAN’s launch as a Community this year and plans to make even stronger efforts to deal with major issues, and the two leaders had a meaningful exchange of opinions on cooperation in regional and global matters.