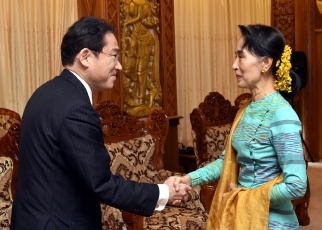 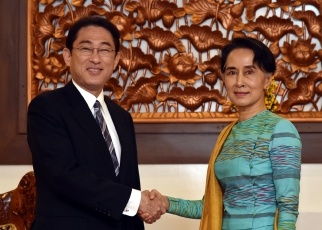 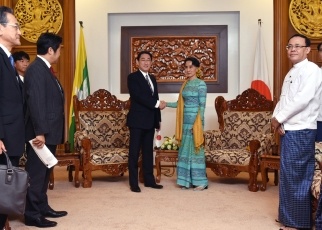 On Tuesday, May 3, commencing at around 9:30 a.m. (local time) for approximately 45 minutes, Mr. Fumio Kishida, Minister for Foreign Affairs, held a meeting with H.E. Ms. Aung San Suu Kyi, State Counselor and Foreign Minister of the Republic of the Union of Myanmar, at Myanmar's Ministry of Foreign Affairs during his visit to Myanmar. The overview from the meeting is as follows.

(1) In his opening remarks, Foreign Minister Kishida welcomed the establishment of a democratic government with support from the vast majority of the people in Myanmar, a country that has a longstanding friendly relationship with Japan, and offered his congratulations once again on the launch of a new Government. He also voiced his respect for the leadership of State Counselor Aung San Suu Kyi, who has implemented a series of reforms, including renewing the formation of ministries and the release of political prisoners, since the outset of the new administration, and expressed that Japan intends to cooperate with the new Government of Myanmar through public- and private-sector efforts.

(3) Foreign Minister Kishida expressed his heartfelt expectations for a visit by State Counselor and Foreign Minister Aung San Suu Kyi to Japan, as communicated previously, and in response to this, she mentioned that their next meeting should be in Japan.

(1)Foreign Minister Kishida explained that the Government of Japan intends to provide full-fledged support, while formulating a specific program of cooperation, mainly in the areas of job creation, agriculture, and healthcare, where the Government of Myanmar is putting emphasis. He also commented that Japan plans to cooperate in bolstering connectivity through infrastructure building, system reforms, and human resource training under the Japan-Mekong Connectivity Initiative (note 1).

Additionally, Foreign Minister Kishida presented Japan's intent to move ahead with the Japan-Myanmar Joint Initiative (note 2) for the purpose of fostering an investment friendly-environment that benefits both the people of Myanmar and Japanese investors; to continue support for nationwide roll-out of Rule of Law Centres; and to promote interaction among people and human resources training.

(2)In response, State Counselor Aung San Suu Kyi acknowledged the assistance from the Japan International Cooperation Agency (JICA) in regard to Rule of Law Centres and expressed her hope for even smoother advances by this assistance. She also voiced agreement with the Japan-Mekong Connectivity Initiative while recognizing the importance of not only roads, bridges, and other infrastructure, but also enhanced connectivity among people. Additionally, State Counselor Aung San Suu Kyi explained that Myanmar is focusing on job creation that contributes to the country's long-term economic advancement, that it hopes to receive assistance in the agricultural area since farmers account for 70% of the population, and that it is looking for project implementation with measures that help raise the technical skills of workers. State Counselor Aung San Suu Kyi mentioned urban development in Yangon and a railway as areas of interest too. She praised Japan's support for the Seed Bank and asked for continued assistance.

(3)The Government of Japan, on the occasion of this visit, announced that it had finalized roughly 3.8 billion yen in assistance for four projects related to residents and refugees struggling with ethnic conflicts and last year's flooding damages in areas of Myanmar's minority populations (see the attachment for details), working together with international agencies, and conducted a signing of the exchange of notes. Japan expects this assistance to contribute to improving living standards as well as national reconciliation with minority ethnic groups that are areas of emphasis for the new administration.

(2)In response, State Counselor Aung San Suu Kyi expressed gratitude for Special Envoy Sasakawa's contributions and expressed Myanmar's desire to achieve results, while working together in the area of national reconciliation as well.

(2)In response, State Counselor Aung San Suu Kyi commented that she is proud of Japan's leadership in the G7 framework, that Myanmar will positively review prompt ratification of the CTBT by acknowledging that Myanmar and Thailand are the only ASEAN countries that have not ratified the CTBT yet.

Note 1: Japan-Mekong Connectivity Initiative
Foreign Minister Kishida proposed this initiative in a speech delivered in Bangkok on May 2 with aims of building infrastructure as well as strengthening system and human connectivity in order to sufficiently utilize physical connectivity as the next stage in the Mekong region and thereby spreading growth to the entire region.

Note 2: Japan-Myanmar Joint Initiative
This is a framework to discuss possible measures to promote and accelerate development of the investment friendly-environment in Myanmar participated by public- and private-sector representatives of both countries.