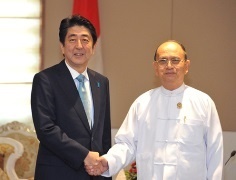 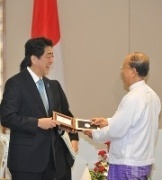 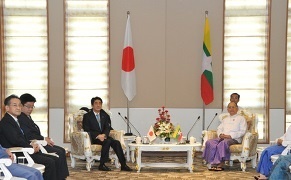 On November 12, commencing at 1:05 p.m. until 1:35 p.m., Prime Minister Shinzo Abe held a meeting with H.E. U Thein Sein, President of the Republic of the Union of Myanmar, in Nay Pyi Taw, Myanmar, where he is attending ASEAN-related Summit Meetings. The overview of the meeting is as follows.
Ahead of the meeting, in light of this year's milestone as the 60th anniversary of the establishment of diplomatic relations between Japan and Myanmar, Prime Minister Abe  handed President U Thein Sein the first 60th anniversary commemorative coin as a symbol of the close relationship between Japan and Myanmar. Additionally, they witnessed the exchange ceremony of a memorandum of understanding on the Thilawa special economic zone's new development area and a declaration on eradicating corruption.

(1) At the beginning, Prime Minister Abe expressed gratitude for Myanmar's leadership as the ASEAN Chair country. He also pledged Japan intends to continue to support Myanmar's efforts for reforms.
(2) In response President U Thein Sein expressed his gratitude for the considerable support extended by Japan, including in the economic field, and asked for cooperation going forward also.

Prime Minister Abe explained that in order to encourage national reconciliation between the Government of Myanmar and ethnic minorities, Japan will continue to support to encourage moves towards peace with ethnic minorities in Myanmar under the policy of "Proactive Contribution to Peace", in cooperation with Mr. Yohei Sasakawa, Special Envoy of the Government of Japan for National Reconciliation in Myanmar, who was present at this Summit meeting. Prime Minister Abe said he strongly hopes that a nationwide ceasefire agreement is realized promptly. In response, President Thein Sein expressed thanks for support from Japan, including Special Envoy Sasakawa, and said he wants to continue to promote national reconciliation, explaining the current circumstances. Additionally, Prime Minister Abe encouraged further efforts to improve the situation in Rakhine State in Western Myanmar, and President U Thein Sein said he will make efforts to improve the situation with the cooperation of foreign countries. Prime Minister Abe also expressed expectation that defense exchanges, including receiving officials from the Myanmar Defense Service to study abroad at the National Defense Academy of Japan, will move ahead.

(1) Prime Minister Abe welcomed Myanmar's decision to grant license for operating in Myanmar to three Japanese banks, and said Japan intends to contribute to the development of the financial sector. President U Thein Sein expressed expectation that investment from Japan will increase upon  this opportunity. Prime Minister Abe also conveyed that he wants to aim to promptly conclude a tax convention in order to expand investment.
(2) President U Thein Sein expressed his gratitude for the support by Japan's public and private sectors regarding the development of the Thilawa special economic zone extended, and said the Government of Myanmar also intends to extend the necessary cooperation.
(3) Prime Minister Abe explained a recent decision to provide yen loans for three projects in total of 26 billion yen, and said Japan will cooperate to develop the finance for small and medium-sized enterprises, the power distribution and Thilawa Port and so on. He also said in addition to cooperating in fields such as postal services, telecommunications, broadcasting, and construction, Japan intends to use the expertise of  its public and private sectors to develop hub facilities for health and medical care and the  human resources and so on. President U Thein Sein again expressed his gratitude for Japan's extensive support.
(4) In addition, both leaders shared the view that Japan, Myanmar and Thailand will continues the trilateral consultation among them to develop the Dawei area.

4. Recovery of the remains of the war dead

Prime Minister Abe said he attaches importance to recovering the remains of Japanese war dead in Myanmar, and request the cooperation by the Myanmar government to facilitate the project. President U Thein Sein replied that he will provide necessary supports  from a humanitarian perspective.

Both leaders shared the view to promote cooperation on regional and international affairs, including issues of "the rule of law at sea" and the North Korea, at the ASEAN-related Summit Meetings and other events.