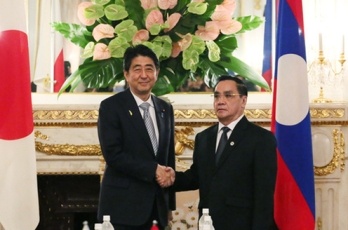 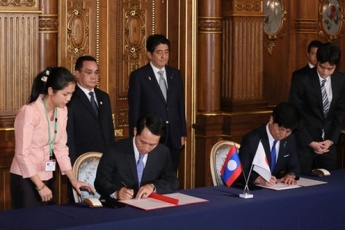 On July 4 from 5:25 p.m. for approximately 25 minutes, Prime Minister Shinzo Abe held a Japan-Lao PDR Summit Meeting with H.E. Mr. Thongsing Thammavong, Prime Minister of the Lao People’s Democratic Republic, who is on a working visit to Japan to attend the Seventh Mekong-Japan Summit Meeting. The following is a summary of the meeting.

Prime Minister Abe and Prime Minister Thongsing attended the signing ceremony of the exchange of notes for two grant aid projects (the Project for Acceleration of UXO Clearance for Rural Development and Poverty Eradication (phase 2) (grant aid of 845 million yen), and the Economic and Social Development Programme (grant aid of 500 million yen)), and then held a joint press conference.

In his opening remarks, Prime Minister Abe expressed his great pleasure at once again welcoming Prime Minister Thongsing to Japan this year, which marks the 60th anniversary of the establishment of Japan-Lao PDR diplomatic relations; and that he hoped for Lao PDR’s cooperation for the steady implementation of the “New Tokyo Strategy 2015.” Also, in order to substantiate their “Strategic Partnership,” Prime Minister Abe stated he intended to further strengthen cooperation with Lao PDR, which will be the ASEAN chair country next year.

(1) The economy and economic cooperation

Prime Minister Abe stated that Japan is contributing to strengthening the regional connectivity within the region through the Partnership for Quality Infrastructure. In response, Prime Minister Thongsing expressed his gratitude for the highly efficient ODA provided by the Government of Japan to the region over many years.

Further, with regard to the two grant aid projects to be exchanged of Notes later which the exchange of notes had been carried out earlier, Prime Minister Abe said Japan intended to support the removal of unexploded ordnance (UXO) within Lao PDR that was impeding its economic development; and also that on the occasion of Lao PDR becoming the ASEAN chair country next year, he hoped it would effectively use the resources and equipment purchased with the ODA. In response, Prime Minister Thongsing expressed his deep gratitude for the support currently being provided by the Government of Japan, and that he hoped for its continued support in the future. Prime Minister Thongsing stated that as next year’s ASEAN chair country, Lao PDR hoped to welcome Prime Minister Abe at the ASEAN Summit Meeting and to draw on Japan’s experience and support to hold the meeting.

Prime Minister Abe stated that Japan would continue pursuing its approach of a “Proactive Contribution to Peace” and requested for the understanding and support of Lao PDR, and also that he hoped to utilize the Security Dialogue that was held in April of last year to strengthen their mutual understanding in the security field. Prime Minister Thongsing responded by praising Japan’s enormous contribution to the promotion of peace in the region and international society, and once again expressed the support of Lao PDR for Japan to become a permanent member of the United Nations Security Council.

The two leaders also exchanged opinions on cooperating in the regional and international arenas. Finally, Prime Minister Abe, touching upon the scheduled visit of Prime Minister Thongsing’s delegation on July 5 to Kyoto City Zoo, said he hoped they would enjoy the good health of the elephants donated recently to the zoo by Lao PDR.