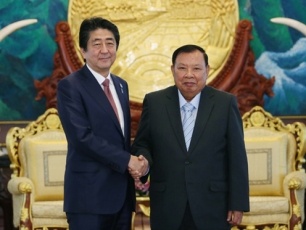 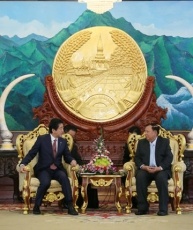 In his opening remarks, President Bounnhang gave his welcome for the visit to Laos by Prime Minister Abe and expressed his great appreciation for Japan's assistance over the years. He also noted the increase in investments by Japanese companies in recent years and the urgent need to improve the local legal framework.

In response, Prime Minister Abe expressed his gratitude for the welcome by Laos and commented that investments by Japanese companies in Laos have risen since his previous visit in 2013 and that Japan hopes to continue contributing with quality infrastructure technology. He noted his respect for efforts by Laos to prepare for this series of meetings as the chair this year. Furthermore, Prime Minister Abe commented that Laos was the first destination for Japan Overseas Cooperation Volunteers roughly half a century ago and that about 780 young people have worked throughout the country thus far and also thanked President Bounnhang for his positive assessment of activities by the volunteers and courtesy toward them in 2002 (then-Prime Minister) and continuation of this stance by Dr. Thongloun Sisoulith, Prime Minister of the Lao People's Democratic Republic.

Prime Minister Abe introduced the activities of the "Diet Member's Group for Building Schools for Asian Children" that he chairs and this group's plan to build an elementary school in Sarawan (southern Laos). President Bounnhang stated that assistance for poor regional areas has significant meaning and commented that Japanese experts and volunteers work closely with the Lao people and spoke highly of the Japan Overseas Cooperation Volunteers, particularly the fact that many of them are proficient in speaking Lao. He also expressed deep gratitude on behalf of Laos for the contributions of Japan's multifaceted assistance to Laos' socioeconomic development. In response, Prime Minister Abe explained that Japan intends to continue cooperating with Laos in human resource training and quality infrastructure and that Japan adheres to a fundamental philosophy of "growing together" and "walking together."

Additionally, Prime Minister Abe explained that Japan not only plans to continue moving forward with economic and development relations but also wants to cooperate on pressing international affairs and regional situations with Laos as a Strategic Partner, with which it has consistently built a favorable relationship for over 60 years.