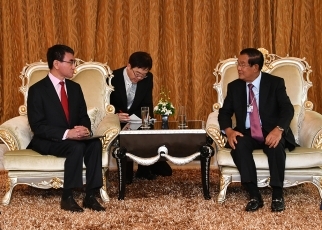 On September 12, commencing at 4:20 p.m. (6:20 p.m., Japan time) for approximately 50 minutes, Mr. Taro Kono, Minister for Foreign Affairs, who was visiting Vietnam to attend the World Economic Forum on ASEAN, paid a courtesy call on Samdech Akka Moha Sena Padei Techo Hun Sen, Prime Minister of the Kingdom of Cambodia. The overview of the meeting is as follows.

1. At the beginning, Prime Minister Hun Sen expressed gratitude for the congratulatory message from Prime Minister Abe and Minister Kono for the formation of the new Cambodian Royal Government and mentioned that he looks forward to visiting Japan to attend the Mekong-Japan Summit Meeting in Tokyo next month.
In response, Minister Kono expressed gratitude for the warm reception during his visit to Cambodia last April and mentioned that he looks forward to the Prime Minister’s visit to Japan next month.

2. Refering to the Japan’s view on the Cambodian national election in July which was conveyed in the bilateral Foreign Ministers’ Meeting in August, Minister Kono stated that Japan hopes Cambodia will prosper by continuing to walk the path of democratic development under the support of international community and to that end, Japan expects that Cambodia will promote the domestic democratic process under the leadership of Prime Minister Hun Sen. Furthermore, Minister Kono stated that he will have a thorough discussion with H.E. Mr. Prak Sokhonn Deptuy Prime Minister and Minister of Foreign Affairs and International Cooperation who is scheduled to visit Japan next neek.
In response, Prime Minister Hun Sen explained how broadly the government had drew support from the Cambodian people.