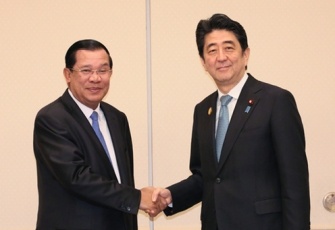 On March 15, commencing at 12:10 p.m. for approximately 35 minutes, Prime Minister Shinzo Abe held a meeting over lunch with Samdech Akka Moha Sena Padei Techo Hun Sen, Prime Minister of the Kingdom of Cambodia, during his stay in Sendai to participate in the Third UN World Conference on Disaster Risk Reduction. An overview is as follows.

Prime Minister Abe explained that Japan has followed the path of a peaceful nation for the period of 70 years since the end of World War II, and would like to make a greater contribution to the peace and prosperity of the region and the world from the standpoint of “Proactive Contribution to Peace” based on the principle of international cooperation. Prime Minister Abe said Cambodia is the starting point for Japan’s contributions to peace-building, and he welcomes Cambodia’s attendance at the High-Level Seminar on Peacebuilding, National Reconciliation and Democratization in Asia that will be held in Tokyo in June this year. Prime Minister Hun Sen replied that Japan is fulfilling an important role in peace and stability in the international arena, and Cambodia is also performing a role in the framework of the UN, including dispatching PKO units.

Prime Minister Abe expressed his respect for the leadership that Prime Minister Hun Sen is displaying with various administrative and fiscal reforms. In connection with the election reform that Cambodia is engaged in, Prime Minister Abe said that to ensure the credibility of the election he hopes there will be ongoing dialogue based on the recent agreement between the ruling and opposition parties. He said following on from the technical study team that Japan dispatched last year, it will do its utmost to support reform, including dispatching Japanese expert(s). In response, Prime Minister Hun Sen expressed his gratitude for Japan’s election reform support, and explained that a seminar was held recently based on the agreement between the ruling and opposition parties, and in addition, legislation concerning elections is scheduled to be enacted in the future.

3. The economy and people-to-people exchanges

Prime Minister Abe offered his heartfelt congratulations on the completion of the Tsubasa Bridge in April (Neak Loeung Bridge; Japan extended grant aid of approximately 12 billion yen), and said he would like to contribute to achieving sustainable growth by substantially strengthening connectivity with neighboring countries via quality infrastructure investment. Prime Minister Abe pledged to provide a 19.2-billion yen loan in order to improve National Road No. 5.

In response, Prime Minister Hun Sen said he is pleased that the Tsubasa Bridge will open to traffic before the Khmer New Year in mid April. He said the Tsubasa Bridge is an important bridge linking Mekong countries, and expressed his gratitude for Japan’s support for National Road No. 5, which comes on top of the support for National Road No. 1 received from Japan thus far.

Prime Minister Abe said the number of Japanese companies operating in Cambodia has been increasing in recent years, and he hopes further efforts will be made to improve the investment environment in Cambodia. He said in light of the signing of the Japan-Cambodia Air Services Agreement in January, he wants to cooperate on achieving direct flights promptly going forward. Prime Minister Abe noted that reciprocal visa exemptions for holders of diplomatic and official passports will commence soon, and said he hopes economic relations and people-to-people exchanges will expand further.

In response, Prime Minister Hun Sen expressed expectation over direct flight services, and said he would like to move ahead with preparations to begin the visa exemptions.

4. Cooperation in the regional and international arenas

The two leaders exchanged views on maritime-related issues, North Korea, UN reform and whaling, and they also shared the view that they will cooperate on sharing the importance of high-efficiency coal-fired power generation, a useful measure for countering climate change, with the international community. The two leaders also confirmed that they will cooperate on the Mekong-Japan Summit Meeting taking place in Tokyo in July.