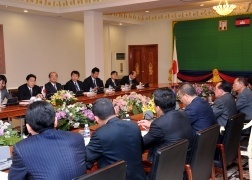 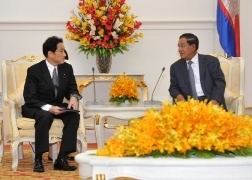 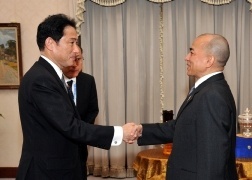 Audience with His Majesty the King

Minister for Foreign Affairs Fumio Kishida paid an official visit to Cambodia on Sunday, June 29 and Monday, June 30. The overview of the visit is as follows.

A. At the outset, Deputy Prime Minister Hor Namhong welcomed the visit of Minister Kishida, and stated that he would like to take this opportunity to further strengthen the Japan-Cambodia “strategic partnership.” Minister Kishida stated that he looked forward to advancing the “strategic partnership” established between the two leaders in 2013 and strengthening coordination not only on bilateral relations but also on regional and international issues.
B. Bilateral relations
C. Cooperation in regional and international issues

(3) Audience with His Majesty the King

Minister Kishida conveyed that Japan would continue to support the development of democracy and the rule of law in Cambodia. His Majesty the King expressed appreciation for Japan’s assistance for Cambodia’s nation building.
Minister Kishida also stated that the next year marks the 60th anniversary of the Japan-Cambodia Treaty of Amity signed by the late Norodom Sihanouk, the former King of Cambodia, and expressed his hope to further enhance the friendly relationship. His Majesty the King expressed his support.