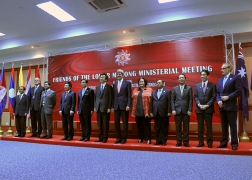 On July 1, the Third Friends of the Lower Mekong (FLM) Ministerial Meeting was held in Bandar Seri Begawan, Brunei Darussalam from 7:00 p.m. for approximately one hour. From Japan, Mr. Fumio Kishida, Minister for Foreign Affairs, attended the meeting. An overview of the meeting is as follows. After the meeting, a Joint Ministerial Statement was issued (In attendance were: Mr. John Kerry, Secretary of State of the United States, and Mr. Greg Beck, Deputy Administrator of the United States Agency for International Development (USAID) (co-chairs) from the United States, in addition to foreign ministers and representatives from the Mekong region countries (Cambodia, Laos, Myanmar, Thailand, and Viet Nam), Australia, the European Union (EU), New Zealand, the Republic of Korea, the Asian Development Bank (ADB), the World Bank, and the ASEAN Secretariat).