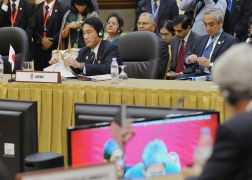 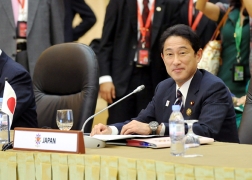 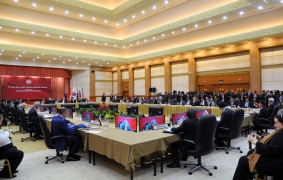 Foreign Minister Fumio Kishida opened his remarks by expressing his appreciation to Brunei Darussalam and Cambodia for their efforts in holding the meeting.

He stressed that the East Asia Summit (EAS) is a Leaders-led forum of this region, and wished not only to promote the existing six priority areas, but also to deepen discussion and cooperation in the political and security area.

He also appreciated that as Chair, Brunei Darussalam has proposed several initiatives including food security, and that Japan has been actively taking part in this field, noting the importance of addressing such issue at the EAS.

Foreign Minister Kishida reiterated that Japan puts importance on maintaining order and promoting cooperation in the sea of the Asia-Pacific region, which is a public commons, and that it is important to build confidence among countries based on the "rule of law".

From this point of view, he stated that the First Expanded ASEAN Maritime Forum (EAMF) that the Philippines hosted last year is an extremely important framework in order to further cooperate among all members of the EAS. He welcomed Malaysia’s announcement of its intention to host the 2nd EAMF before the EAS, and looked forward to actively cooperating for the success of the forum.

The Minister also extended his support for the establishment of the EAS Track II Study Group on Enhancing Food Security that was proposed by Brunei Darussalam. He noted that many of the members of EAS are maritime nations, and food security, sustainable fisheries management, and marine environment conservation are of common interests. He looked forward to actively cooperating for the realization of this proposal.

Foreign Minister Kishida reported the outcome of the Second East Asia Low Carbon Growth Partnership Dialogue on May 18, 2013 in Tokyo under the co-chair of Cambodia and Japan, with discussions focusing on “technology” that contributes to low carbon growth. He stated that Japan will host a high-level forum next year, which will aim for active participation from the private sector.

Foreign Minister Kishida addressed that the Asia-Pacific region is a disaster prone region, and that Japan would like to continue to play a main role in the field of disaster management cooperation, both multilaterally and bilaterally, through cooperation with EAS members who have fought against natural disasters for many years.

He introduced that Japan has provided ICT equipment to ASEAN Coordinating Center for Humanitarian Assistance on disaster management (AHA Center), and is currently assisting for the instantaneous information sharing between AHA Center and each ASEAN Member States. Furthermore, he added that, last year Japan had assisted in the development of a disaster emergency logistic system for ASEAN. The Minister mentioned that we witnessed the success of providing stock supplies to Myanmar and the Philippines last November and December respectively, soon after the establishment of the system.

He also introduced that Japan will host the Third UN World Conference on Disaster Risk Reduction in the disaster affected city of Sendai in March 2015, hoping to mainstream disaster management through the active participation at the ministerial level from each country.

Foreign Minister Kishida expressed that Japan has been putting importance on youth exchanges to give a firm foundation for a stronger bond in Asia, and in 2007, Prime Minister Abe launched “JENESYS,” in which approximately 52,000 youths were exchanged between Japan and EAS participating countries in five years. The Minister mentioned that the Prime Minister, during his visit to ASEAN this January, announced to start the “JENESYS 2.0” Project as a successor to “JENESYS” by exchanging approximately 30,000 youths between Japan and Asian/Oceanian region, and added the recent launch of the “KAKEHASHI Project” with the North American region, putting the total size of exchanges to 35,000 youths.

Foreign Minister Kishida emphasized that Japan will continue to make efforts in strengthening ASEAN Connectivity. He also highlighted that it is important to take measures in international terrorism and transnational crimes such as narcotics, human trafficking, and cyber crimes, as well as non-proliferation in Asia, which are inextricably linked to strengthening Connectivity. He noted that Japan will continue to assist in these areas such as by hosting the Asian Senior-level Talks on Non-Proliferation (ASTOP) and the Asian Export Control Seminar.

He mentioned that the Post-MDGs will be an important discussion that will define the ways of future international cooperation, stressing that Japan would like to strive to establish an effective post-2015 MDGs hand-in-hand, reflecting the experience and lessons learnt in Asia and guided by human security. He also explained that Japan has prioritized global health in its foreign policy, and will assist countries in need of achieving universal health coverage.

Minister Kishida raised the issue of North Korea, reaffirming Japan’s consistent basic policy of aiming at comprehensive resolution of outstanding issues of concern such as the abductions, nuclear and missile issues, and emphasized that North Korea must first take concrete actions to this end.

He added that any dialogues with North Korea must be serious and for the purpose of its denuclearization. Hence, the Minister reiterated that the international community should never allow North Korea to be a nuclear state, and must continue to send a strong message to North Korea so that it complies faithfully and fully with all relevant United Nations Security Council Resolutions. In this context, he stressed that it is also important for each country to fully implement these UNSC Resolutions including on export control.

Foreign Minister Kishida also addressed that the abductions issue is a grave issue concerning the sovereignty of Japan as well as the lives and safety of Japanese citizens, and is a universal issue for the whole international community as a violation of basic human rights. He mentioned that Prime Minister Abe is determined to completely resolve the abductions issue during his current term, and requested each country's cooperation on this matter.

Minister Kishida stated that the issue on the South China Sea is directly connected to the peace and stability of the region, and is of common interests and concerns for the international community as a whole, stressing that all parties concerned should refrain from taking any coercive and unilateral action and respect relevant international law in order to establish the principle of the "rule of law" in the region.

The Minister also emphasized the importance for ASEAN to keep its unity and to play an active role for the peace and stability in the South China Sea. Following the Joint Press Release by China and ASEAN the day before yesterday, he also looked forward to the commencement of substantial inter-governmental negotiations on a Code of Conduct (COC), and early conclusion of a legally binding COC between China and ASEAN which will contribute effectively to peaceful settlement of disputes.