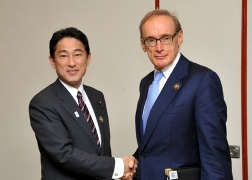 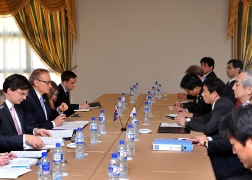 On Monday, July 1, commencing at 11:40 a.m. (local time) for approximately 30 minutes, Mr. Fumio Kishida, Minister for Foreign Affairs, who is visiting Brunei Darussalam to attend the ASEAN Foreign Ministers' Meeting, held a Japan-Australia Foreign Ministers' Meeting with Senator the Honourable Bob Carr, Minister for Foreign Affairs of Australia. The outline of the meeting is as follows.

Minister Kishida congratulated Minister Carr on his continued appointment as Minister for Foreign Affairs, expressed gratitude for the fruitful meeting held during his visit to Australia in January, and said that he wanted to continue to strengthen cooperative relations with Australia, a strategic partner for Japan which shares fundamental values and interests. In response, Minister Carr expressed agreement with Minister Kishida's statements and communicated his pleasure at seeing the solidification of Japan-Australia relations. He also said that he wanted to further strengthen bilateral relations.

Minister Kishida welcomed the entry into force of the Japan-Australia Acquisition and Cross-Servicing Agreement (ACSA) and Japan-Australia Information Security Agreement (ISA). The ministers shared the view that Japan and Australia would further enhance security and defense cooperation, including Japan- U.S.-Australia trilateral cooperation.

In addition, Minister Kishida said that he wanted to continue close collaboration with Australia on the Non-Proliferation and Disarmament Initiative (NPDI). Minister Carr conveyed agreement with this. Furthermore, Minister Kishida expressed the desire to further enhance Japan-Australia economic relations through the conclusion of the Japan-Australia Economic Partnership Agreement (EPA), and through collaboration in the context of the Trans-Pacific Partnership (TPP) and the Regional Comprehensive Economic Partnership (RCEP) negotiations, and other opportunities. In response, Minister Carr said that he looked forward to the participation of Japan in the TPP negotiations.

The ministers shared the view that they would continue to closely collaborate on issues surrounding the South China Sea and the situation on the Korean Peninsula at the ASEAN Foreign Ministers' Meeting. They also had an exchange of opinions on situations in the Asia-Pacific region.