Exchange Meeting with Members of Japanese Companies in Northern Ireland 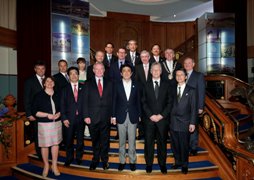