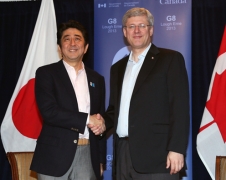 For approximately 30 minutes from 2:30 p.m. on June 17 (Monday local time), Prime Minister Shinzo Abe held a summit meeting with Rt Hon Stephen Harper, Prime Minister of Canada, on the sidelines of the Group of Eight (G8) Summit in Lough Erne, Northern Ireland. An outline of the meeting is as follows: