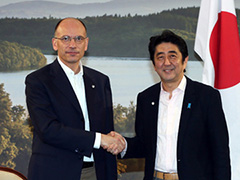 On Monday, June 17, commencing at 7:55 P.M. (local time) for about 25 minutes, Prime Minister Shinzo Abe, who is visiting Lough Erne in the United Kingdom to attend the G8 Summit, met with Hon. Enrico Letta, President of the Council of Ministers of the Republic of Italy.The administration of Prime Minister Letta, former Deputy Secretary of the Democratic Party, was inaugurated in April under a grand coalition of center-left and center-right, following an election for both chambers of Italy's parliament in February.

It was their first meeting as the Prime Ministers of Japan and Italy.

An outline of the meeting is as follows: 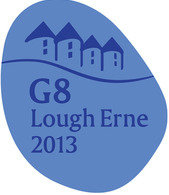