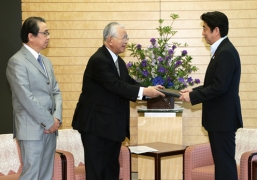 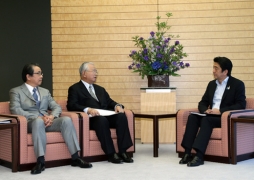 On Wednesday, June 5, for approximately 15 minutes from 3:00 p.m., Prime Minister Shinzo Abe received a courtesy call from EU-Japan Business Round Table (BRT) Co-Chairman Hiromasa Yonekura (Chairman of Sumitomo Chemical Co., Ltd.) and Acting Co-Chairman Osamu Nagayama (Representative Director, Chairman and CEO of Chugai Pharmaceutical Co., Ltd.). The summary of the meeting is as follows. From the Government of Japan, Deputy Chief Cabinet Secretary Hiroshige Seko and others were in attendance.