Signing of the Japan-Mozambique Investment Agreement 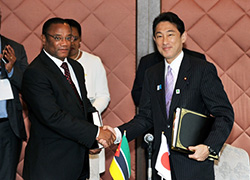