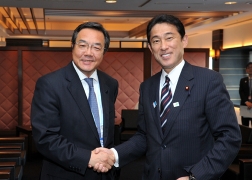 On June 2, commencing at 5:10 p.m. for around 15 minutes, Mr. Fumio Kishida, Minister for Foreign Affairs, held a meeting with Mr. Koji Sekimizu, Secretary-General of the International Maritime Organization (IMO), who was visiting Japan to attend the Fifth Tokyo International Conference on African Development (TICAD V), which was being held in Yokohama. The overview of the meeting is as follows.

(Reference) The IMO’s Djibouti Code of Conduct Trust Fund was established at the IMO in September 2009 to facilitate the implementation of the Djibouti Code of Conduct (adopted in January 2009 at the IMO Sub-regional meeting on maritime security, piracy and armed robbery against ships for Western Indian Ocean, Gulf of Aden and Red Sea States [the Djibouti Meeting]; it established goals related to such efforts as the enhancement of law-enforcement capabilities for anti-piracy measures that should be undertaken around Somalia, the promotion of capacity building, and the construction of a regional information sharing system).