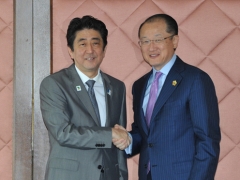 On June 2, commencing at 8:00 a.m. for around 15 minutes, Mr. Shinzo Abe, Prime Minister of Japan, held a meeting with Dr. Jim Yong Kim, President of the World Bank, who is visiting Japan in order to participate in the Fifth Tokyo International Conference on African Development (TICAD V), which is currently being held in Yokohama City. The overview of the meeting is as follows.