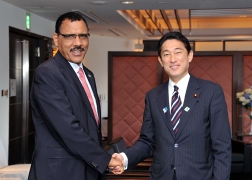 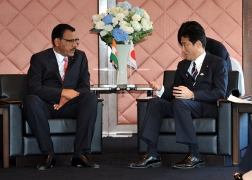 On June 2, for about 25 minutes from 4:00pm, Foreign Minister Fumio Kishida had a meeting with H.E. Mr. Mohamed Bazoum, Minister of State, Foreign Affairs, Cooperation, African Integration and Overseas Nigeriens of the Republic of Niger, in Yokohama Japan. The following is the gist of the meeting. Foreign Minister Bazoum is visiting Japan to participate in the Fifth Tokyo International Conference on African Development (TICAD V) held from June 1 to 3.