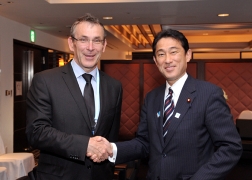 On June 2, commencing at 6:05 P.M. for around 15 minutes, Mr. Fumio Kishida, Minister for Foreign Affairs of Japan, held a meeting in Yokohama with Mr. Andris Piebalgs, European Commissioner for Development, who is visiting Japan. The overview of the meeting is as follows.