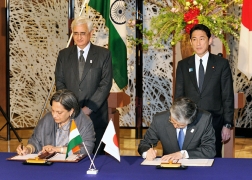 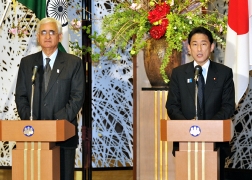 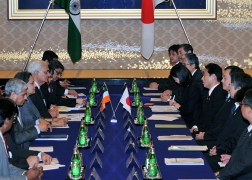 On Tuesday, March 26, Minister for Foreign Affairs H.E. Mr. Fumio Kishida held the Seventh Japan-India Foreign Ministers’ Strategic Dialogue with H.E. Mr. Salman Khurshid, External Affairs Minister of India, during the latter’s visit to Japan, at the Iikura House of the Ministry of Foreign Affairs. The overview of the meeting is as follows. During the first half of this Foreign Ministers’ Strategic Dialogue the ministers exchanged views on bilateral relations for around one hour and 15 minutes. Subsequently, following a signing ceremony for the Exchange of Notes for yen loans to India and a joint press announcement, the second half of the meeting was held for around one hour in the form of a working dinner, and the Ministers exchanged views mainly on regional issues. (Note: The Japan-India Foreign Ministers’ Strategic Dialogue has been held in Japan and India alternately each year since 2007. Last year, the dialogue was held in Delhi in April.)