Meeting between Prime Minister Abe and H.E. Dr. Nkosazana Clarice DLAMINI-ZUMA, Chairperson of the Commission of the African Union (AU) 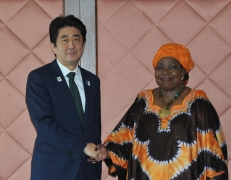 (Photo: Cabinet Public Relations Office)
On June 1, for 15 minutes from 10:00 am, Prime Minister Shinzo Abe had a meeting with H.E. Dr. Nkosazana Clarice DLAMINI-ZUMA, Chairperson of the Commission of the African Union in Yokohama. The following is the gist of the meeting. H.E. Dr. Nkosazana Clarice DLAMINI-ZUMA is visiting Japan to participate in the fifth Tokyo International Conference on African Development (TICAD V) currently held from June 1 through 3.

1. At the beginning of the meeting, Prime Minister Abe said that her speech given in the plenary session held just before the meeting was wonderful and that he was delighted to be able to see her again, who became the leader of Africa. Prime Minister Abe also expressed his congratulations on the 50th anniversary of the OAU (the Organization of the African Unity)/AU (the African Union) and his intention for development both in Africa and Japan in the wake of TICAD V, which marks the 20th anniversary of the TICAD process.

2. In response, Chairperson DLAMINI-ZUMA said that the initial concept of TICAD was steadily coming to fruition and expressed her congratulations on the 20th anniversary of TICAD. While mentioning that TICAD was a beneficial process for Africa, she expressed her expectation to lead it to next level. Sharing her view of the future outlook to achieve stability and prosperity in Africa, she also said that AU was looking forward to the cooperation between AU and Japan and she expected cooperation in such fields as human resources development, health, education, science and technology, agriculture, industry, trade and promotion of tourism.

3. Prime Minister Abe welcomed that the co-hosting of TICAD by AU has strengthened African “ownership” and “partnership”, and expressed his expectation for further partnership with AU. Prime Minister Abe also expressed his intention to visit Africa at an early stage and high expectation for the role of AU to achieve the peace and stability of Africa. He continued that Japan is implementing “Kaizen” support for the Commission of AU and provide strong assistance for AU’s continental development initiatives.