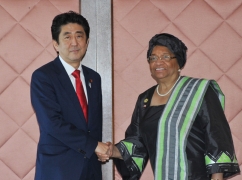 (Photo: Cabinet Public Relations Office)
On May 31, for about 15 minutes from 11:55 am, Prime Minister Shinzo Abe had a summit meeting with H. E. Mrs. Ellen Johnson Sirleaf, President of the Republic of Liberia in Yokohama, Japan. The following is the gist of the meeting. President Sirleaf is visiting Japan to participate in the Fifth Tokyo International Conference on African Development (TICAD V) held from June 1 to June 3.

1. At the beginning of the meeting, Prime Minister Abe welcomed a visit of President Sirleaf and expressed his hope for mutual development of Japan and Africa in the wake of TICAD V, which marks the 20th anniversary of the TICAD process. In response, President Sirleaf expressed her sincere gratitude for the invitation to TICAD V and her respect for the policies launched by Prime Minister Abe for triggering economic recovery in Japan, hoping that the recovering Japanese economy will help the world economy grow strongly.

2. President Sirleaf then noted that it is a challenge for Liberia to add value on its mineral resources and agricultural products even though the Liberian economy had enjoyed high growth during 2008 and 2009 while the world economy had slowed down. She explained that her administration is implementing policies of infrastructure development, mainly for transportation and energy supply, and creating employment through development of manufacturing industries, and utilizing private investment. She also expressed her gratitude for aids from Japan for restoring Liberia after the civil war ceased, and added that she continued her efforts for economic development and participation of women with support from Japan.

3. Prime Minister Abe expressed his respect for President Sirleaf’s leadership for putting the Liberian economy steadily on tracks of development. He stated that Japan’s strong economy would help Africa become stronger and assist Liberia in achieving development, and Japan would continue support for Liberia, mainly in areas of economic and social development, including road construction and electric power supply.