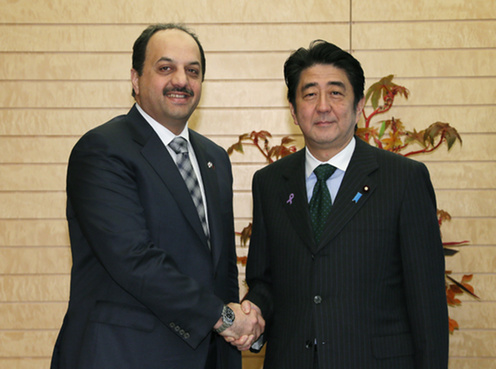 On Friday, November 15, commencing at 11:40 a.m. for approximately 15 minutes, Prime Minister Shinzo Abe received a courtesy call from H.E. Dr. Khalid bin Muhammad Al-Attiyah, Minister of Foreign Affairs of the State of Qatar. The overview of the meeting is as follows.

1. In the beginning of the meeting, Prime Minister Abe welcomed Minister Al-Attiyah’s visit to Japan while mentioning that he met H.H. Sheikh Tamim bin Hamad Al Thani, the Emir of the State of Qatar in Doha in August and in Buenos Aires and New York in September. Prime Minister Abe said that these frequent summit-level exchanges are a sign that the “comprehensive partnership” between the two countries is strengthening.

2. Both sides shared the importance of expanding both countries’ investment via initiatives such as the visit of the Qatari investment mission to Japan this time, and also of further strengthening the cooperative relationship between the two countries in areas such as energy, infrastructure and parliamentary-level exchanges.