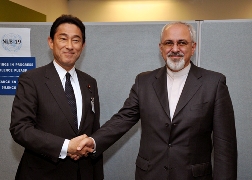 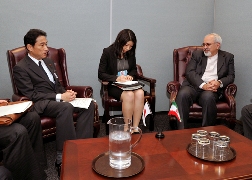 1. At the beginning, Minister Kishida stated that the Government of Japan would like to further deepen the relationship of trust based on the traditional relations with Iran, and engage in a frank exchange of opinions. Minister Kishida added that the Government of Japan is encouraged by the stance of Dr. Hassan Rouhani, new President of the Islamic republic of Iran, who calls his government “the government of prudence and hope” that seeks for a constructive cooperation with the international community through moderate approaches. He also stated that he strongly expects concrete progress toward the solution of the nuclear issue under the initiative of Foreign Minister Zarif, who is in charge of the nuclear negotiations. In response to this, Foreign Minister Zarif stated that he emphasizes the importance of Japan-Iran relations, and would like to deepen and expand the relations in the future as well.

2. Subsequently, both Ministers mainly exchanged their opinions on the bilateral relations and Iran’s nuclear issue. Minister Kishida stated that showing flexibility from the Iranian side would be a key for solving the issue, and that the Government of Japan is ready to cooperate with Iran to this end. Foreign Minister Zarif listened in a serious manner.

3. Furthermore, both Ministers exchanged their opinions on the situation in Syria as well. Minister Kishida stated that he strongly expects Iran, a major nation of the region, to play constructive roles for the improvement and normalization of the situation.