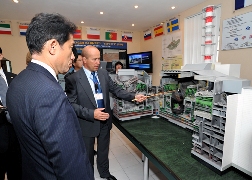 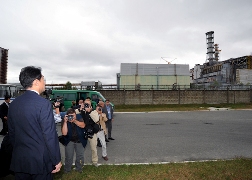 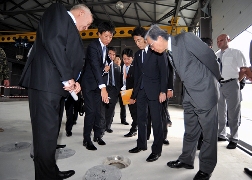 On Sunday, August 25, Foreign Minister Kishida, who is currently in Ukraine, visited the nuclear power plant at Chernobyl. Mr. Kishida is the first Foreign Minister of Japan to visit the plant. The overview of the visit is as follows.

1. Foreign Minister Fumio Kishida visited the Reactor No. 4 at the Chernobyl Nuclear Power Plant, where an accident occurred in 1986, and he was briefed by high-ranking officials of the Ukrainian government, including the head of the nuclear power plant, regarding factual background on the Chernobyl accident, and subsequent measures that were carried out by the Ukrainian government. Foreign Minister Fumio Kishida then visited an exhibition hall, where a miniture of the Reactor No. 4 is installed, a radioactive waste material processing facilities, the city of Pripyat, from where all the residents were evacuated after the accident in 1986, and the city of Chernobyl, where employees working in the no-entry zone currently live.

2. Foreign Minister Kishida stated that he was deeply impressed by the hard efforts for rehabilitation in Ukraine that have been made in the past 27 and by the fact that such efforts are still continuing today. He also reaffirmed that Japan and Ukraine are both tackling similar issues related to rehabilitation and recovery following their accidents in these countries. Foreign Minister Kishida added that knowledge and insight gained from Chernobyl has been useful with regard to recovery efforts in Japan, and he agreed that along the Ukraine side, the two countries would continue to move forward with cooperation related to the nuclear power accidents in the countries.