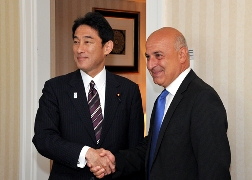 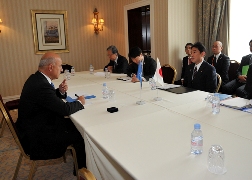 On Monday, August 26, from 10:00 A.M. to 10:30 A.M., Minister for Foreign Affairs Fumio Kishida, who is currently in Ukraine, received a courtesy call from H.E. Mr. Valeri Chechelashvili, Secretary General of GUAM. The overview of the meeting is as follows.

1. Foreign Minister Kishida opened the meeting by stating that Japan has been strategically developing its foreign policies on the basis of fundamental values including freedom, democracy, the rule of law, and human rights, and that, since it shares such values with GUAM, there is a potential for Japan and GUAM to be able to further strengthen their cooperative relationship in the future. He added that Japan will continue to develop the framework of "GUAM+Japan", consisting of two pillars: 1) "close dialogues" with a focus on effective promotion of democracy and the market economy in GUAM countries and the exchange of views on regional and international situations and 2) "realistic and substantive cooperation" through holding of workshops.

2. Secretary General Chechelashvili expressed his appreciation for the successful holding of the Fifth "GUAM+Japan" National Coordinators' Meeting in Tokyo in May, and for the assistance that Japan has provided to GUAM to date, including the holding of workshops in Tokyo every year.

3. The two parties shared the view that they will continue to enhance cooperation within the "GUAM+Japan" framework.

* The foregoing is a provisional translation. The date indicated above denotes the date of the original in Japanese.
Page Top
Back to Countries & Regions