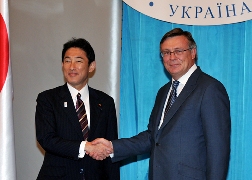 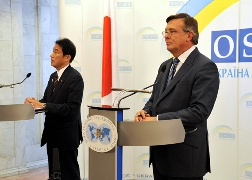 At the beginning, Minister Kishida stated that he was pleased to pay a visit to Ukraine as Japan's Foreign Minister for the first time in seven years, the Government of Japan emphasized relations with Ukraine which has economic potential, and he was looking forward to discussing international situations with Ukraine, a country that holds an important strategic position, being located between Russia and the EU. In response to this, Minister Kozhara welcomed Minister Kishida's visit to Ukraine and stated that he would like to collaborate with Minister Kishida for the development of bilateral relations.

Both ministers shared the view that Japan and Ukraine shared the unfortunate experience of nuclear power station accidents and it was the duty of the countries that had suffered nuclear power station accidents to share the experience of Fukushima and Chernobyl between the two countries and to proactively provide the results of cooperation to the international community. Moreover, both ministers also shared the view that the Fukushima/Chernobyl Joint Satellite Observation Project currently in progress between the University of Tokyo and concerned organizations such as the State Space Agency of Ukraine is a symbolic project of the cooperation between two countries in aftermath response to the nuclear power station accidents and the Governments of the two countries would continue their supports for the success of the project.

Both ministers confirmed the results of the visit to Japan by Mr. Petro Oleksiyovych Poroshenko, Minister of Economic Development and Trade of Ukraine, last year and the Joint Economic Meeting and touched upon the visit to Ukraine by the Nippon Keidanren scheduled in October, expressing their high expectation toward further deepening economic relations between the two countries. Moreover, Minister Kishida, stating that political stability and a good investment environment would be key factors for Japanese enterprises to decide to invest in Ukraine, added that further democratization and market economy in Ukraine are important and emphasized the importance of the Investment Agreement which has been under negotiation. In response to this, Minister Kozhara stated that he would like to accelerate the negotiation toward the conclusion of the Agreement. Furthermore, Minister Kishida requested immediate termination of a measure increasing tariff on imported vehicles, stating that such a measure is strongly suspected of inconsistency with the World Trade Organization (WTO) Agreement.

Both Ministers shared the view that they will hold the third Japan-Ukraine Committee on Scientific and Technological Cooperation by the end of this year and also aim to expand cooperation in the field of science and technology, the strength of the two countries.

Both ministers exchanged views on the regional situations that the two countries share mutual interest. In this context, Minister Kishida gave an explanation on the security environment in East Asia where the situation has been increasingly severe. Both ministers shared the view on the importance of the principles of the international laws and establishment of the "rule of law" in the region. In addition, Minister Kishida expressed his concern over the export of weapons, including a landing ship, from Ukraine to China.
With regard to North Korea, both ministers shared the view that they will never accept North Korea possessing nuclear weapons, and would continue to send a strong message that North Korea should faithfully and thoroughly implement the relevant United Nations Security Council Resolutions instead of taking any provocative actions. Furthermore, Minister Kishida expressed his strong determination to resolve the abduction issue and Minister Kozhara expressed his support of Japan's stance.
In addition to the above, Minister Kozhara gave explanations on its relations with EU and Russia.

A project that launches a variety of eight small Earth observation satellites, which are under development by the Intelligent Space Systems Laboratory [ISSL] (The University of Tokyo), with the cooperation from concerned organizations such as the State Space Agency of Ukraine and the National Academy of Sciences of Ukraine to jointly observe Fukushima and Chernobyl. The project aims to make high-level analysis of the situations on the ground over the long term and in a wide range of aspects by use of images taken by the satellites.

* The foregoing is a provisional translation. The date indicated above denotes the date of the original in Japanese.
Page Top
Back to Countries & Regions