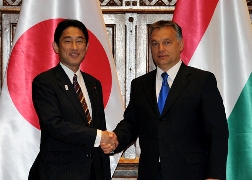 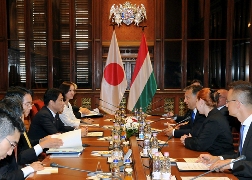 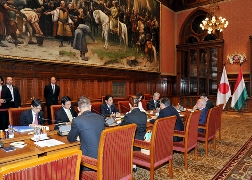 Fumio Kishida, Minister for Foreign Affairs of Japan, paid a courtesy call on H.E. Mr. Viktor Orbán, Prime Minister of the Republic of Hungary, from shortly after 2 p.m. to 3 p.m. local time in Hungary on Friday, August 23. An outline of the meeting follows:

(1) At the start of the meeting, Foreign Minister Kishida stated that he was pleased to visit Hungary following the Japan-Hungary Summit Meeting and the Visegrad Group (V4) plus Japan Summit Meeting in Warsaw in June. Mr. Kishida also said he welcomes the visit to Japan by Prime Minister Orbán that is planned for later in the current fiscal year. He added that Japan hopes to work closely with Hungary, which holds the V4 Presidency, in order to promote the further development of relations between the two countries and to strengthen the V4 plus Japan framework.

(1) Foreign Minister Kishida said that he highly values the outcome of the V4 plus Japan Summit Meeting in June. He also said that the Summit Meeting sent out the message that Japan and the V4 will jointly address a range of issues in the international community. He also touched upon a set of agreements in the Summit Meeting on cooperation in the security field and on support for the Eastern Partnership (EaP) the Western Balkan countries.

(2) Foreign Minister Kishida noted that in order to follow up the V4 plus Japan Summit, seminars on Official Development Assistance (ODA) and security issues are scheduled to be held during the period of Hungary's V4 Presidency. He also stated that Japan hopes to work with Hungary to promote events related to the Year of Exchange for the V4 plus Japan in 2014.