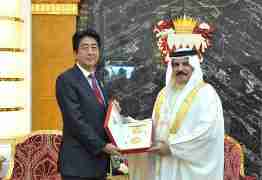 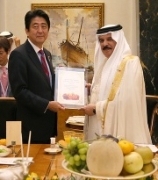 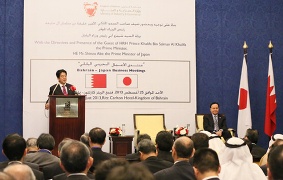 On Sunday, August 25, Prime Minister of Japan Shinzo Abe visited the Kingdom of Bahrain (Manama). The major events, overview, and results of his visit are as follows:

(1)Meeting between members of the business communities of Japan and Bahrain (including a greeting from Dr. Hassan (bin Abdullah) Fakhro, Minister of Industry and Commerce)
(2)Courtesy call by Vice Admiral John W. Miller, Commander of the U.S. Fifth Fleet and the Combined Maritime Forces
(3)Meeting with H.M. King Hamad bin Isa Al Khalifa, King of the Kingdom of Bahrain; presentation of the Order of Khalifa; luncheon hosted by H.M. King Hamad
(4)Telephone talk with H.R.H. Prince Salman Bin Hamad Al Khalifa, the Crown Prince of the Kingdom of Bahrain
(5)Visit to the Bahrain National Museum (including informal discussion with H.E. Shaikha Mai (bint Mohammed Al Khalifa), Minister of Culture)
(6)Greeting from the Principal of the Japanese School in Bahrain
(7)Courtesy call by interns from disaster-affected areas in the Tohoku Region, Jaan

Prime Minister Abe attended the meeting (see note) between members of the business communities of Japan and Bahrain, and in his opening greeting, he explained that the first crude oil exported from Bahrain was sent to Japan, and that last year the Japan-Bahrain Economic Cooperation Association was launched in Japan, along with noting that an increasingly diverse range of Japanese companies has been advancing into Bahrain in recent years, and expressing expectation that the cooperative relationship between the two countries in the economic sector will progress further. Ahead of this informal session Prime Minister Abe met with Dr. Hassan (bin Abdullah) Fakhro, Minister of Industry and Commerce, and other officials.

Prime Minister Abe held a telephone talk with H.R.H. Prince Salman, who was not in Bahrain at that time, and they welcomed the major results of the first-ever visit by a Prime Minister of Japan to Bahrain, along with sharing the view that the cooperative relationship will grow stronger going forward. Prime Minister Abe conveyed his gratitude in particular for the fact that restrictions on imports of Japanese foodstuffs had been lifted upon mutually decided terms. H.R.H. Prince Salman said he highly appreciates the great interest Japan shows in Bahrain, and the role it is playing in various areas on the political, economic and social fronts, and added that he is pleased to have lifted the restrictions on imports of Japanese foodstuffs.

(5)Visit to the Bahrain National Museum

Prime Minister Abe was met by Minister of Culture H.E. Shaikha Mai (bint Mohammed Al Khalifa), and received an explanation regarding exhibits etc. at the Bahrain National Museum, along with viewing a display of the Dilmun and Tyros civilizations and a display showing the traditional Bahraini way of life.

(6)Greeting from the Principal of the Japanese School in Bahrain

Prime Minister Abe held a meeting with 11 technical college students from areas affected by the Great East Japan Earthquake who are undertaking training in Bahrain. Prime Minister Abe said he found compelling their strong commitment to recovery and their enthusiasm to study while eyeing a future dream, and said that he wants them to gain something during their training that helps them become individuals who can play an active role globally. Prime Minister Abe also praised and encouraged these college students for endeavoring to study in the Middle East, which is a long way from Japan.