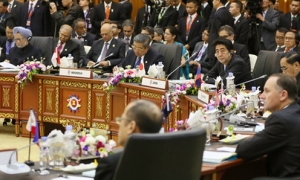 The Eighth East Asia Summit was held on October 10th, 2013 in Bandar Seri Begawan, Brunei Darussalam. Prime Minister Abe attended the meeting. The following is a summary of Prime Minister Abe’s statement delivered during the Summit.

Prime Minister Abe opened his remarks by stressing that the East Asia Summit (EAS) is a significant forum where leaders frankly exchange views centered on political and security area, and expressed his desire to further bolster the development of the forum.

Prime Minister Abe reiterated that the seas are vital global commons, and must be open and stable, and that order must be ruled by “law” and not by “force.” He emphasized that it is essential to build confidence among each country, and promote concrete cooperation to this end.
From these points of view, he stressed that the Expanded ASEAN Maritime Forum (EAMF) is an extremely important framework where all members of the EAS attend, and welcomed the 2nd EAMF which was hosted by Malaysia on October 3rd, adding that it is important to convene the forum regularly.
The Prime Minister also stated that the EAS Track II Study Group on Enhancing Food Security through Sustainable Fisheries Management and Marine Environment Conservation that was proposed by Brunei Darussalam is an important initiative, expressing his strong support to actively cooperate on this, and wished to reaffirm at the leaders’ level to continue these efforts by the EAS.

(1) South China Sea
Prime Minister Abe stated that the issue of the South China Sea is directly connected to the peace and stability of the region, and is of common interests and concerns for the international community as a whole, as it impacts the global maritime order. He stressed that all parties concerned should not resort to changing the status quo unilaterally, abide by relevant international laws including the UN Convention on the Law of the Sea (UNCLOS), and emphasized the importance of clarifying their claims, adding that disputes must be resolved peacefully in accordance to international law.
(2) North Korea
Prime Minister Abe stressed that North Korea’s continued nuclear related activities and missile development are not only violations of UN Security Council Resolutions and the 19 September 2005 Joint Statement of the Six-Party Talks, but also increase danger of proliferation of nuclear materials and related technologies, which is a grave threat to the peace and stability of the international community. Hence, the Prime Minister reiterated that the international community should fully implement relevant UN Security Council Resolutions including on export control, and must continue to clearly send a unified and firm stance that we will never allow North Korea to be a nuclear state.
He stated that the window for dialogue with North Korea is not closed, provided that North Korea faithfully and fully implements all relevant UN Security Council Resolutions as well as the Joint Statement of the Six-Party Talks, and takes concrete actions towards denuclearization and other goals.
The Prime Minister expressed his concern on the overall human rights issues in North Korea including the abductions issue. In this context, he welcomed the decision made at the UN Human Rights Council in March of this year to establish a UN Commission of Inquiry (COI) regarding human rights situation in North Korea.
(3) Syria
Prime Minister Abe welcomed the adoption of the UN Security Council Resolution on the destruction of chemical weapons in Syria. He also noted that Japan will continue to support the efforts by relevant countries and organizations so that chemical weapons will never be used again, and cooperate with them as much as possible. He added that cessation of violence, initiation of political dialogue and improvement of appalling humanitarian conditions is an urgent challenge in Syria, and reiterated his announcement at the UN General Assembly that Japan will provide additional humanitarian assistance of approximately US$60 million. He stressed that he will continue to coordinate with the international community for the improvement and normalization of the situation in Syria.

(1) Disaster Management
Prime Minister Abe introduced that Japan is assisting the ASEAN Coordinating Center for Humanitarian Assistance on Disaster Management (AHA Center) such as through the provision of ICT equipment. He added that Japan assisted in the development of a disaster emergency logistic system for ASEAN last year and welcomed that it has already made numerous achievements. He stressed that Japan will lead the way in assisting ASAEN on this issue.
Additionally, the Prime Minister stated that Japan will host the Third UN World Conference on Disaster Risk Reduction in the disaster affected city of Sendai in March 2015, noting that it will be a significant opportunity to adopt a new disaster prevention framework for post-2015, and expressed his hope to have active attendance of ministers from each country and mainstream disaster prevention.
(2) Low Carbon Growth
Lastly, Prime Minister Abe addressed the issue of low carbon growth, reporting the outcome of the Second East Asia Low Carbon Growth Partnership Dialogue which was held in May this year in Tokyo under the co-chair of Cambodia and Japan. He added that Japan will host a high-level forum next year, which aims for active participation from the private sector.
He concluded by reiterating that Japan will continue to cooperate and work together with each EAS member in establishing and promoting Joint Crediting Mechanism and enhancing efficient use of coal.