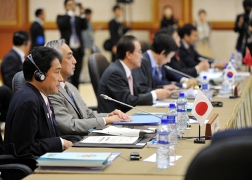 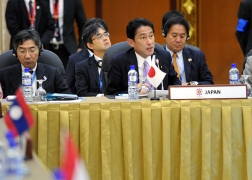 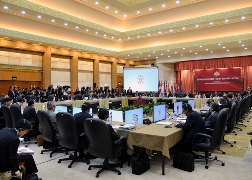 Opening Remarks
Foreign Minister Fumio Kishida opened his remarks by expressing his appreciation to His Royal Highness Prince Mohamed Bolkiah, Minister of Foreign Affairs and Trade of Brunei Darussalam, and the Government of Brunei Darussalam for their warm hospitality and preparation for the series of meetings.
He also welcomed the progress that has been made in the ASEAN Plus Three (APT) cooperation as the parties welcomed their 15th anniversary last year, and that it has developed into an important framework of regional cooperation in East Asia.
Minister Kishida then introduced the progress that has been made since last year’s APT Foreign Ministers’ Meeting in three areas of finance, food security and trade.
Finance
He emphasized the importance of financial cooperation as it continues to be a core cooperation area in the APT.  In this regard, he welcomed that the draft Agreement on the Establishment of the APT Macroeconomic Research Office (AMRO), which would transform AMRO to an international organization, was virtually agreed.  Minister Kishida reiterated Japan’s determination to continue to contribute in the area of financial cooperation in the APT.
At the same time, he welcomed the inauguration of the guarantee transaction of the Credit Guarantee and Investment Facility (CGIF) and hoped that the CGIF will contribute to the expansion of local currency-denominated bond transaction in the region as well as to regional economic growth.
Food Security
Foreign Minister Kishida commended that the APT Emergency Rice Reserve (APTERR) Agreement that entered into force last July extended its first assistance in response to the flood damage last December and praised it as an important step for the region’s efforts in food security. He reiterated that Japan will continue to cooperate based on the Agreement to facilitate its smooth implementation.
Trade
Foreign Minister Kishida welcomed the commencement of the first round of negotiations on the Regional Comprehensive Economic Partnership (RCEP) that was held in Brunei Darussalam last month as a significant kick-off.  He stated that Japan will continue to actively contribute towards the realization of a comprehensive and high-quality RCEP Agreement.
The Foreign Minister also expressed gratitude for the tremendous assistance from each APT country in the aftermath of the Great East Japan Earthquake, and appreciated that regional countries have relaxed or completely removed restrictions on Japanese food products.
He also introduced that the current air radiation level in Japan is on par with other major cities around the world, and food safety is ensured under strict control. He requested to those countries that still continue import restrictions to review their measures, as Japan will continue to promptly and accurately provide information needed for safety evaluation such as results of food monitoring.
ASEAN Connectivity
Foreign Minister Kishida also explained that Japan is actively promoting assistance towards strengthening ASEAN Connectivity, attaching importance to “People-to-People Connectivity” such as education, tourism, cultural exchange among others in the APT framework and introduced three Japanese initiatives as a follow up to the “Leaders’ Statement on ASEAN Plus Three Partnership on Connectivity” that was adopted last November.
(1) Japan will host the Network of East Asian Think-Tanks (NEAT) Working Group under the theme of “Education, Tourism, Cultural Exchange” in Tokyo at the end of July this year.
(2) Japan will also host the 11th East Asia Forum (EAF) in Kyoto this August with the theme of “Enhancing People-to-People Connectivity: Focusing on Tourism Cooperation.”
(3) With regards to cooperation in education, Japan will host the “1st APT Working Group on Mobility of Higher Education and Ensuring Quality Assurance of Higher Education among ASEAN Plus Three Countries” this fall in Tokyo.
Regional and Global Issues
Minister Kishida raised the issue of North Korea, reaffirming Japan’s consistent basic policy of aiming at comprehensive resolution of outstanding issues of concern, such as the abductions, nuclear and missile issues, and emphasized that North Korea must first take concrete actions to this end.
He added that any dialogues with North Korea must be serious and for the purpose of its denuclearization. Based on this, the Minister reiterated that the international community should never allow North Korea to be a nuclear state, and must continue to send a strong message to North Korea so that it complies faithfully and fully with all relevant United Nations Security Council Resolutions. In this context, he stressed that it is also important for ASEAN Member States as well as the Plus Three countries to fully implement these UNSC Resolutions including on export control.
Foreign Minister Kishida also addressed that the abductions issue is a grave issue concerning the sovereignty of Japan as well as the lives and safety of Japanese citizens, and is a universal issue for the whole international community as a violation of basic human rights. He mentioned that Prime Minister Abe is determined to completely resolve the abductions issue during his current term, and requested each country’s cooperation on this matter.