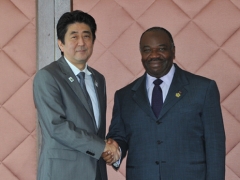 (Photo: Cabinet Public Relations Office)
On June 2, for about 15 minutes from 10:15 am, Prime Minister Shinzo Abe had a meeting with H.E. Mr. Ali Bongo Ondimba, President of the Gabonese Republic, in Yokohama Japan. The following is the gist of the meeting. President Bongo is visiting Japan to participate in the Fifth Tokyo International Conference on African Development (TICAD V), which is held from June 1 to 3.
1. At the beginning of the meeting, Prime Minister Abe welcomed President Bongo’s fourth visit to Japan and expressed his hope for mutual development of Japan and Africa in the wake of TICAD V, which marks the 20th anniversary of TICAD process. In response, President Bongo expressed his gratitude for the welcome and applauded Prime Minister Abe’s address at the plenary session on June 1.
2. President Bongo said that he especially attached an importance on progress in economic ties with Japan during this visit, and expressed his expectation for investment from Japanese companies in Gabon that is rich in natural resources. President Bongo also introduced Gabon’s efforts for advancing the development of natural resources while protecting the forests which cover a large part of the country. Furthermore he showed his expectation for Prime Minister Abe’s coming to Gabon.
3. Prime Minister Abe stated that a session with the Japanese business groups is arranged at the TICAD V, and expected that would lead to promote Japanese investment in Gabon thereby contributing to the development of Gabon. He also expressed his intention to dispatch a joint mission of public and private sectors in order to strengthen trade and investment with Gabon. Further, Prime Minister Abe expressed his respect for managing balance between the forest conservation and the utilization of natural resources, and said that Japan would continue assistance to Gabon in the fields such as environment.
4. The two parties also exchanged opinions on the cooperation in the international arena, including development in Africa.