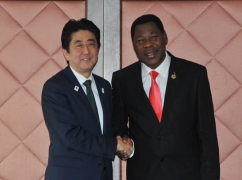 (Photo: Cabinet Public Relations Office)
On June 1, for about 20 minutes from 3:30 pm, Japanese Prime Minister Shinzo Abe had a summit meeting with H.E. Dr. Thomas Boni Yayi, President of the Republic of Benin, in Yokohama. The following is the gist of the meeting. President Yayi is visiting Japan to participate in the Fifth Tokyo International Conference on African Development (TICAD V) held in Yokohama, from June 1 to June 3. During the meeting, the two leaders called each other by their first names, Shinzo and Thomas Boni.
1. At the beginning of the meeting, Prime Minister Abe said that he was pleased to meet Thomas Boni again, following the president’s last visit in March this year, and mentioned that the president is now famous in Japan thanks to his appearance on TV with H.E. Mr. Zomahoun D.C. Rufin, Ambassador of the Republic of Benin to Japan. In response, President Yayi expressed his gratitude to his good friend, Prime Minister Abe, and wished for his success as a Japanese leader. He also stated that Japan’s support to Africa up to approximately 3.2 trillion yen over the next five years as announced by Prime Minister Abe will further strengthen the relationship between Africa and Japan.
2. President Yayi expressed his expectation for Japanese cooperation in the construction of water-supply facilities in rural areas, the increase in youth employment and the improvement of food production. He also said that he would like to invite Prime Minister Abe to Benin. Further, President Yayi expressed his expectation for Japanese investment in Benin in the sector of resource development such as steel, gold and oil.
3. Prime Minister Abe said that the bilateral cooperation has progressed since the summit meeting held last March, as there is a progress in the preparation for the water supply project. Mr. Abe also stated that Japan will strongly support the efforts of the countries in and around the Sahel for realizing peace and stability, including counter-terrorism measures. He also expressed his gratitude for the invitation to visit Benin.
4. The two parties also exchanged opinions on cooperation in the international arena, including development in Africa.