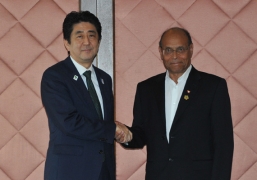 (Photo: Cabinet Public Relations Office)
On June 1, for about 15 minutes from 4:00 pm, Prime Minister Shinzo Abe had a meeting with H. E. Dr. Moncef Marzouki, President of the Republic of Tunisia, in Yokohama. The following is the gist of the meeting. President Marzouki is visiting Japan to participate in the Fifth Tokyo International Conference on African Development (TICAD V) held from June 1 to June 3.
1. At the beginning, Prime Minister Abe welcomed President Marzouki’s visit and expressed his support to Tunisian government’s efforts toward building a new nation under the leadership of President Marzouki. In response, President Marzouki expressed his sincere gratitude for Japan’s successive support for Tunisia for more than 50 years.
2. President Marzouki said that Tunisia was in the process of a nation building after a peaceful and democratic revolution and requested Japan’s support for the project of a flood control of Medjerda River, a construction of power plants and a desalination of seawater, all of which are important to the social and economic development in Tunisia.
3. Prime Minister Abe expected that a new constitution would be established within this year, and both a general election and a presidential election would be held under a new constitution and the democratization process in Tunisia would succeed. Prime Minister Abe also expressed an intention to support continuously areas on which the Tunisian government places importance and anti-terrorism measures. In response, President Marzouki appreciated Japan’s support on public security in Tunisia and noted that the democratization in Tunisia was in progress steadily and elections would be taken place by December this year under a new constitution.
4. Two leaders exchanged opinions concerning cooperation in the international arena, including the development of Africa.