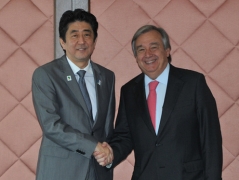 (Photo: Cabinet Public Relations Office)
On June 2, for 10 minutes from 8:20am, Prime Minister Shinzo Abe had a meeting with Mr. António Manuel de Oliveira Guterres, the UN High Commissioner for Refugees (UNHCR). The following is the gist of the meeting. Mr. Guterres is visiting Japan to participate in the Fifth Tokyo International Conference on African Development (TICAD V) held from June 1 to June 3.
1. Prime Minister Abe stated that Japan recognizes UNHCR as a leading humanitarian organization and values the importance of cooperation in the field of peace and security. He also thanked High Commissioner Guterres for participating in the Fifth Tokyo International Conference on African Development (TICAD V), and expressed his gratitude with regard to UNHCR’s contributions to the TICAD process to date. He also supported UNHCR’s position of recognizing the importance of supporting the repatriation and reconstruction of refugees, as well as tackling the issue of conflicts in Africa.
2. High Commissioner Guterres then expressed his appreciation to Japan for the extensive financial assistance provided for the activities of UNHCR, and stated UNHCR’s intention to cooperate with Japan for the durable solution of refugee issue in Africa. High Commissioner Guterres expressed the importance of the Japanese role conducting diplomacy based on a universal value, while conflicts in the world are mutually interlinked threatening world peace.
3. Prime Minister Abe then requested UNHCR to increase the number of its Japanese staffs, with a view to further strengthening collaboration between Japan and UNHCR.