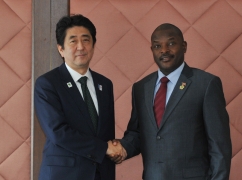 (Photo: Cabinet Public Relations Office)
On June 1, for about 20 minutes from 12:05 pm, Prime Minister Shinzo Abe had a meeting with H.E. Mr. Pierre Nkurunziza, President of the Republic of Burundi, in Yokohama Japan. The following is the gist of the meeting. President Nkurunziza is visiting Japan to participate in the Fifth Tokyo International Conference on African Development (TICAD V) held from 1 to June 3.
1. At the beginning of the meeting, Prime Minister Abe welcomed President Nkurunziza’s visit all the way to Japan for the first time to participate in TICAD V, and expressed his expectation for the success of TICAD V, which marks its 20th anniversary, hoping for development both in Africa and Japan.
2. In response, President Nkurunziza extended his gratitude for the warm welcome and congratulations on the holding of TICAD V. President Nkurunziza also said that Japan’s assistance in various fields such as education, health, agriculture, transportation, environment and energy is beneficial for development in Burundi, and expressed his appreciation for Japan’s assistance on behalf of the Government and the people of Burundi. President Nkurunziza further mentioned that his country has been working hard for peace and stability after the civil war in Burundi ended with hundreds of thousands of casualties left, but is now becoming to contribute to peace and stability in Africa through dispatching Burundi contingents to Somalia and other areas, and also working on poverty reduction and regional development to realize stability and development in his country. The President expressed his expectation for Japan’s continued support.
3. Prime Minister Abe paid his respect for the efforts of President Nkurunziza to achieve reconciliation among the Burundi people and reconstruction in Burundi, and expressed his support for Burundi’s efforts, adding that Japan concluded an agreement for assisting the Burundi returnees last March. Furthermore, Prime Minister Abe said that steady progress in development is vital for peace and stability. From this viewpoint, Prime Minister Abe expressed his expectation that the road construction work in Bujumbura supported by Japan’s grant aid which had completed last March and non-project grant aid provided from Japan would contribute to social and economic development in Burundi, and conveyed a message that Japan would conduct a preparatory survey on assistance for expanding the Bujumbura port.
4. The two parties also exchanged opinions on the cooperation in the international arena, including development in Africa.